Mouse Guard: Baldwin the Brave and Other Tales (Hardcover) 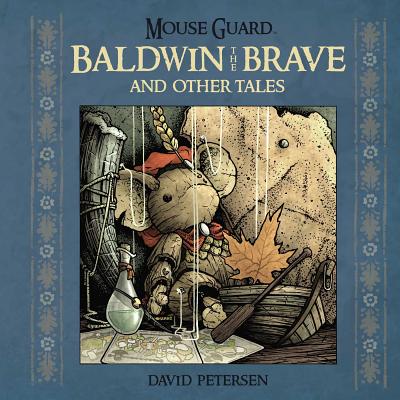 Mouse Guard: Baldwin the Brave and Other Tales (Hardcover)

This is book number 1 in the Mouse Guard series.

Behind every brave mouse, there is a tale.

Kenzie’s father tells him a bedtime story about a Wise Weaver who takes on three terrifying predators with the sharpest weapon of all: his mind. Young Saxon goes to see a puppet show about the great Baldwin the Brave, whose optimism and courage changed his town forever. Sadie hears the love story of the worthy mouse Thane in his quest to win the heart of the talented and beautiful Ilsa. Young Rand hears the rarely heard tale of the Black Axe Trio, three sisters who carried on a legend, each in their own special way. Plus, stories of Seyan, the land where Mouse warriors travel after death, and of Insects, the faeries of the Mouse world! Every hero was once a child, listening to the stories of the heroes who came before them. It is the same with the Mouse Guard. Eisner Award-winning creator David Petersen spins six mouse fables, as told to a few familiar young furs, in this beautiful collection. Four Mouse Guard Free Comic Book Day stories brought together for the first time, as well as two brand new tales, reminding us all to be brave, stay true to ourselves, and follow out hearts.
David Petersen was born in 1977. His artistic career soon followed. A steady diet of cartoons, comics and tree climbing fed his imagination and is what still inspires his work today. He is a three time Eisner Award winner for his work on his Mouse Guard series. David received his BFA in Printmaking from Eastern Michigan University where he met his wife Julia. They continue to reside in Michigan with their dogs Autumn and Bronwyn