Cuba Since the Revolution of 1959: A Critical Assessment (Paperback) 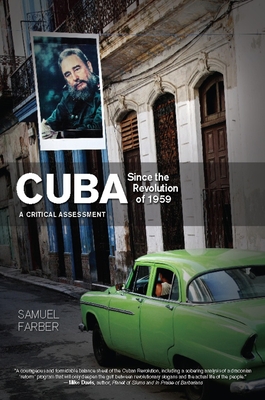 Cuba Since the Revolution of 1959: A Critical Assessment (Paperback)

Uncritically lauded by the left and impulsively denounced by the right, the Cuban Revolution is almost universally viewed one dimensionally. Farber, one of its most informed left-wing critics, provides a much-needed critical assessment of the revolution's impact and legacy.
Samuel Farber was born and raised in Marianao, Cuba, and came to the United States in February 1958. He obtained a Ph.D. in Sociology from the University of California at Berkeley in 1969 and taught at a number of colleges and universities including UCLA and, most recently, Brooklyn College of the City University of New York, where he is a Professor Emeritus of Political Science. His scholarship on Cuba is extensive and includes many articles and two previous books: Revolution and Reaction in Cuba, 1933-1960 (Wesleyan University Press, 1976) and The Origins of the Cuban Revolution Reconsidered (University of North Carolina Press, 2006). He is also the author of Before Stalinism. The Rise and Fall of Soviet Democracy (Polity/Verso, 1990) and Social Decay and Transformation. A View From The Left (Lexington Books, 2000). Farber was active in the Cuban high school student movement against Fulgencio Batista in the 1950s, and has been involved in socialist politics for more than fifty years.

"For some left-socialists like Farber, no society seems to have measured up since the Paris Commune of 1871. But patient readers will be rewarded by his frequent insights, stimulating historical comparisons, and command of the data relating to Cuba’s economic and social performance.”
Foreign Affairs

""Though countless analyses evaluate just how thoroughly the revolution has transformed Cuba over the past 50 years, few rival Samuel Farber’s work Cuba Since the Revolution of 1959: A Critical Assessment"
Rebecca Whedon, Foreign Policy in Focus

A courageous and formidable balance-sheet of the Cuban Revolution, including a sobering analysis of a draconian reform’ program that will only deepen the gulf between revolutionary slogans and the actual life of the people.”
Mike Davis professor, University of California, Riverside; author, Planet of Slums and In Praise of Barbarians

[O]pposed as much to neoliberal thought as to the perversions of Stalinist and postmodern communist statism, Farber sets out to critically explore the course followed by the society, government, and
power structures that emerged from the Cuban Revolution of 1959. . . . A necessary and suggestive
reading for all of those concerned with Cuba’s future and with the threat posed by the imperial
power over the entire Caribbean region.”
Adolfo Gilly, emeritus professor of history, Universidad Nacional Autónoma de México (UNAM)

This important, very well-written, and quite interesting book, evaluates the fifty-two years of the Cuban Revolution under a classical Marxist (pre-Stalinist) viewpoint. . . . [Farber] evaluates, with surprising insights, Cuba’s performance on national sovereignty, political democracy, economic growth, social welfare, race, gender, and the stand of domestic and external dissidents and critics. . . . Expect a
strong reaction both from the right and the left. Don’t miss it!”
Carmelo Mesa-Lago, Distinguished Service Professor Emeritus of Economics and Latin American Studies, University of Pittsburgh

Farber’s comprehensive and well-written assessment of Cuba’s experience since 1959 is rooted in
history, informed by the comparative sociology of communist regimes, and rich in insightful and
feisty analysis.”
Jorge I. Domínguez, professor of Mexican and Latin American politics and economics, Harvard University

While acknowledging achievements of the revolutionary process in education and health, and defending Cuban sovereignty against imperial intervention, Farber shatters many of the idyllic myths
propagated by left-wing apologists for the regime’s authoritarianism. . . . A revolutionary democratic
alternative, Farber shows, will only be possible through socialist resistance from below.”
Jeffery R. Webber, author, From Rebellion to Reform in Bolivia: Class Struggle, Indigenous Liberation, and the Politics of Evo Morales

Samuel Farber is an excellent teacher I found myself ending the book humbly grateful to the author for so many things, including his impeccable scholarship and his implacable commitment to the truth.”
Havana Times