The Great Divergence: America's Growing Inequality Crisis and What We Can Do about It (Hardcover) 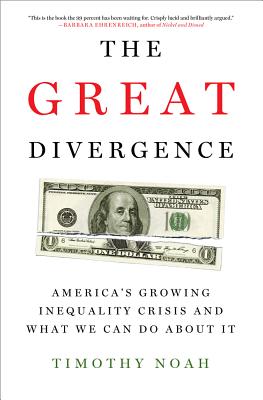 The Great Divergence: America's Growing Inequality Crisis and What We Can Do about It (Hardcover)

For the past three decades, America has steadily become a nation of haves and have-nots. Our incomes are increasingly drastically unequal: the top 1% of Americans collect almost 20% of the nation's income-more than double their share in 1973. We have less equality of income than Venezuela, Kenya, or Yemen.

What economics Nobelist Paul Krugman terms "the Great Divergence" has until now been treated as little more than a talking point, a club to be wielded in ideological battles. But it may be the most important change in this country during our lifetimes-a sharp, fundamental shift in the character of American society, and not at all for the better.

The income gap has been blamed on everything from computers to immigration, but its causes and consequences call for a patient, non-partisan exploration. In The Great Divergence, Timothy Noah delivers this urgently needed inquiry, ignoring political rhetoric and drawing on the best work of contemporary researchers to peer beyond conventional wisdom. Noah explains not only how the Great Divergence has come about, but why it threatens American democracy-and most important, how we can begin to reverse it.

The Great Divergence is poised to be one of the most talked-about books of 2012, a jump-start to the national conversation about what kind of society we aspire to be in the 21st century: a land of equality, or a city on a hill-with a slum at the bottom.

Timothy Noah was recently named "TRB," the lead columnist at The New Republic. He wrote for Slate for a dozen years, and previously served at the Wall Street Journal, the New Republic, and the Washington Monthly. He edited two collections of the writings of his late wife, Marjorie Williams, including the New York Times bestseller The Woman at the Washington Zoo. Noah received the 2011 Hillman Prize, the highest award for public service magazine journalism, for the serie