Down from Cascom Mountain: A Novel (Hardcover) 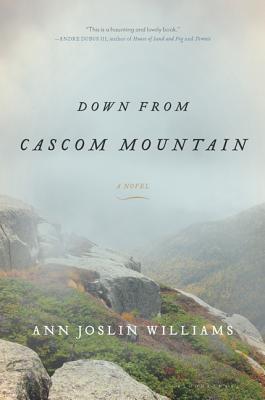 Down from Cascom Mountain: A Novel (Hardcover)

Ann Joslin Williams grew up observing the craft of writing: her father, Thomas Williams, was a National Book Award-winning novelist. Many of his stories were set in the fictional town of Leah, New Hampshire, and on nearby Cascom Mountain, locations that closely mirrored the landscape of the Williamses' real hometown. With Down from Cascom Mountain, Ann Joslin Williams proves herself a formidably talented novelist in her own right, while paying tribute to her father by setting her debut novel in the same fictional world-the New Hampshire he imagined and that she has always known.
In Down from Cascom Mountain, newlywed Mary Hall brings her husband to settle in the rural New Hampshire of her youth to fix up the house she grew up in and to reconnect to the land that defined her, with all its beauty and danger. But on a mountain day hike, she watches helplessly as her husband falls to his death. As she struggles with her sudden grief, in the days and months that follow, Mary finds new friendships-with Callie and Tobin, teenagers on the mountain club's crew, and with Ben, the gentle fire watchman. All are haunted by their own losses, but they find ways to restore hope in one another, holding firmly as they navigate the rugged terrain of the unknown and unknowable, and loves lost and found.
Praise for The Woman in the Woods :
"The Woman in the Woods marks the debut of a wise and beautiful voice in American fiction, one that will stand as a powerful new presence in our literary landscape." -Julie Orringer, author of How to Breathe Underwater and The Invisible Bridge

Ann Joslin Williams grew up in New Hampshire. She earned her MFA in fiction from the Iowa Writers' Workshop, and was a Wallace Stegner Fellow at Stanford University. She is the author of The Woman in the Woods, a collection of linked stories, which won the 2005 Spokane Prize for Short Fiction, and her work has appeared in Storyquarterly, The Iowa Review, The Missouri Review, Ploughshares, and elsewhere. She was the winner of an NEA grant for her work on Down from Cascom Mountain. Williams is an assistant professor at the University of New Hampshire.

“Steeped in the New Hampshire landscape and sensibility... [Williams] follows her characters' moods...closely... The reader is deeply invested, caught up in Mary's grieving, or in Tobin's failure to forgive his mother. Their stories are made memorable.” —Susan Salter Reynolds, Los Angeles Times

“In the wilds of New Hampshire one formative summer, a series of character-building--or breaking--events is visited upon a group of young men and women whose paths cross tragically ont he slopes of Cascom Mountain... [a] gratifying tale.” —New York Times Book Review

“Here in are the qualities of enduring greatness, our turbulent natures, instructions for life. Inside these covers there's a woman's profound love, a terrible and beautiful world, the claw of grief. Her story is told with grace and dignity and the kind of writing we hunger for: straight and true, spare and generous.” —Robert Olmstead, author of Coal Black Horse and A Trail of Heart's Blood Wherever We Go

“Sexy, following a rugged path from sorrow to salvation, Williams' new book is made from the serious materials of sudden grief--but it isn't sad in the least. On the contrary! There's a fierce, hard-won joy here, as sturdy as the mountains of New Hampshire, and as glorious.” —Michael Byers, author of Percival's Planet and The Coast of Good Intentions

“There seems to be no element of these people and this landscape to which Williams is a stranger. She sees straight to the heart of her characters, and it is a pleasure to witness them yearning and grieving and loving their way through these pages, one living human presence after another, the mountain and the forest rising up around them in all their mystery and specificity.” —Kevin Brockmeier, author of Illumination and The Brief History of the Dead