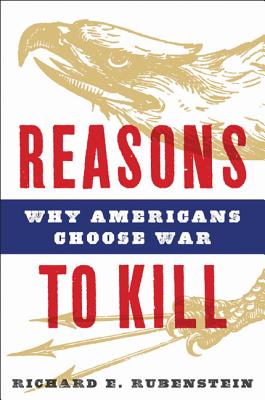 From the American Revolution to the end of World War II, the United States spent nineteen years at war against other nations. But since1950, the total is twenty-two years and counting. On four occasions, U.S. presidents elected as "peace candidates" have gone on to lead the nation into ferocious armed conflicts. Repeatedly, wars deemed necessary when they began have been seen in retrospect as avoidable Aiandill-advised.

Americans profess to be a peace-loving people and one wary of "foreign entanglements." Yet we have been drawn into wars in distant lands from Vietnam to Afghanistan. We cherish our middle-class comforts and our children. Yet we send our troops to Fallujah and Mogadishu. How is it that ordinary Americans with the most to lose are so easily convinced to follow hawkish leaders-of both parties-into war? In "Reasons to Kill" noted scholar Richard E. Rubenstein explores both the rhetoric that sells war to the public and the underlying cultural and social factors that make it so effective. With unmatched historical perspective and insightful commentary, Rubenstein offers citizens new ways to think for themselves about crucial issues of war and peace.

Richard E. Rubenstein is Professor of Conflict Resolution and Public Affairs at George Mason University. His previous books include When Jesus Became God and Aristotle's Children.

“Reasons to Kill is a vital book with an urgent message deserving of a wide readership and much discussion. Better than anyone else, Rubenstein probes America's past and present to question the rush to war post-9/11, and does so judiciously, in a highly readable style enriched by scholarly mastery.”—Richard Falk, author of The Great Terror War and On Humane Governance, Albert G. Milbank Professor Emeritus of International Law at Princeton University and Research Professor in Global and International Studies at the University of California, Santa Barbara

“Many of us long for an intelligent and informed conversation about America’s role in the world. Are we going the way of all empires, or is there another way? Richard E. Rubenstein has provided a sane and probing contribution to that conversation. In a time of faux-populism and jingoistic patriotism, it is encouraging to read a critical analysis of our attitude to war and violence from a writer who deeply loves his country.”—Alan Jones, dean emeritus, Grace Cathedral and author of Soul Making: The Desert Way of Spirituality and Reimagining Christianity: Reconnect Your Spirit without Disconnecting your Mind.

“A powerful and frank discussion of the peculiar American rationales for war and the essential questions to ask about them. You may not agree with everything Rubenstein says, but he makes more sense of American justifications for war than anyone writing now. There is no cant in this book. Like a prophet, Rubenstein is urging Americans now, finally, to be honest and direct about war, as if it were their last chance. It may well be.”—John Womack Jr., Robert Woods Bliss Professor emeritus of Latin American History and Economics, Harvard University, author of Zapata and the Mexican Revolution

“Reasons to Kill makes a forceful case for questioning politicians and ensuring that weare not led blindly into war.”—Literary Hill

“Richard Rubenstein has written a book that every American should read and every peace-oriented American should memorize for the next time they have to explain why it's not enough to be pro-peace in your heart, that you need to actively confront the war makers and those who passively go along with them. Rubenstein carefully explores all the past and current arguments for war, including the war on terrorism, and shows why this is the one political decision that should be taken with the utmost of caution, because ‘while in a democracy we can fix most of our mistakes by throwing the rascals out or changing policies, we cannot resuscitate the dead or cure those permanently maimed in body or in spirit.’ Rather than dismiss those who have supported wars as stupid, inherently militarists, or fundamentally brainwashed, Rubenstein correctly understands that many Americans can be reached through rational discourse, if offered in the respectful way that Reasons to Kill consistently manifests. Please get everyone you know to read this book!”—Rabbi Michael Lerner, editor of Tikkun magazine

“Richard Rubenstein delves deftly into the sociocultural characteristics of our country to understand the context behind America’s proclivity for war. Given America’s military interventionism—every two years since World War II—and given that our children are being raised on a nearly ten-year-old war in Afghanistan, war is what we know, becoming part and parcel of our nation’s psyche and economy. Protecting our nation’s moral integrity, national security, and fiscal solvency, then, requires a thorough read of Rubenstein’s patriotic missive to this country and a willingness to give serious review to his recommendations.”—Representative Michael M. Honda, United States Congress

“A lively, contrarian view of history—fruitful reading for peaceniks and warfighters alike.”—Kirkus Reviews

“Undeniably important”—Publishers Weekly  "Absorbing and engaging. a very useful exploration of an important and timely subject. … This is an even handed, thoughtful, well-written book for interested academics and lay people alike. It is not so long as to be unwieldy or to allow the reader to get lost in unfolding complex, formal arguments. It is a resource to be commended to anyone thinking about war, and how we can better function as thoughtful, engaged citizens of this nation. … While the book is not written from a particular religious or theological perspective, it invites all of us, including people of faith, to be more rigorous in our thinking about, and our response to the prospect of, war."—Conversations in Religion and Theology