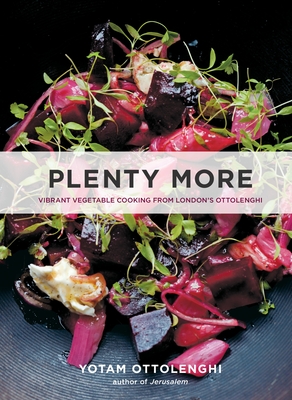 Yotam Ottolenghi is one of the world’s most beloved culinary talents. In this follow-up to his bestselling Plenty, he continues to explore the diverse realm of vegetarian food with a wholly original approach. Organized by cooking method, more than 150 dazzling recipes emphasize spices, seasonality, and bold flavors. From inspired salads to hearty main dishes and luscious desserts, Plenty More is a must-have for vegetarians and omnivores alike. This visually stunning collection will change the way you cook and eat vegetables

Yotam Ottolenghi is a seven-time New York Times best-selling cookbook author who contributes to the New York Times Food section and has a weekly column in The Guardian. His Ottolenghi Simple was selected as a best book of the year by NPR and the New York Times; Jerusalem, written with Sami Tamimi, was awarded Cookbook of the Year by the International Association of Culinary Professionals and named Best International Cookbook by the James Beard Foundation. He lives in London, where he co-owns an eponymous group of restaurants and the fine-dining destinations Nopi and Rovi.

“No chef captures the flavors of the moment better than Yotam Ottolenghi.”
—Bon Appetit

“Ottolenghi is a genius with vegetables—it’s possible that no other chef has devised so many clever ways to cook them.”
—Food & Wine

“Yotam Ottolenghi is the most creative but also practical cook of this new culinary era—a 21st-century Escoffier. If I had a four-star rating for cookbooks, I would give Plenty More five stars.”
—Wall Street Journal

“A new wave of Ottolenghi fever (and fervor) is about to hit and, thank goodness, there’s no cure. I suggest you simply give in to it, replenish your spice pantry, gather your vegetables, grains and legumes, and celebrate big-time.”
—BookPage

Plenty More is even better than the original, fresh with the flavors and ingredients of Ottolenghi's most recent travels and readings. There are still many traces of his Middle Eastern influence, but now he's incorporated touches of Southeast Asia, India, New York, and Britain. Who pairs chanterelle mushrooms, black glutinous rice, tarragon, and goat cheese, and does so with aplomb? Only Ottolenghi. Even if you've already amassed a library of his books, you'll learn something new from Plenty More.
—Serious Eats