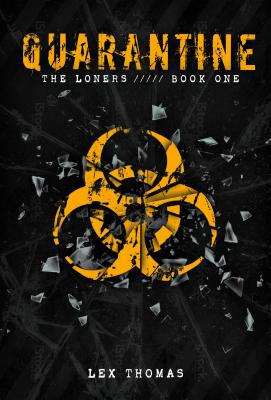 This is book number 1 in the Quarantine series.

It was just another ordinary day at McKinley High--until a massive explosion devastated the school. When loner David Thorpe tried to help his English teacher to safety, the teacher convulsed and died right in front of him. And that was just the beginning.

A year later, McKinley has descended into chaos. All the students are infected with a virus that makes them deadly to adults. The school is under military quarantine. The teachers are gone. Violent gangs have formed based on high school social cliques. Without a gang, you're as good as dead. And David has no gang. It's just him and his little brother, Will, against the whole school. In this frighteningly dark and captivating novel, Lex Thomas locks readers inside a school where kids don't fight to be popular, they fight to stay alive.

Lex Thomas is the author team made up of Lex Hrabe and Thomas Voorhies.

Lex Hrabe was a Drama Geek in high school as well as student body president, but in spite of his affiliations, he probably wouldn't have lasted a week if his school had been quarantined. Lex received a BA in Drama and English from the University of Virginia and has worn hats as an actor, director, and writer. In addition to working as a screenwriter, he heads development at Cinespire Entertainment, a boutique production company (www.cinespire.com).

If Thomas Voorhies were a character in The Quarantine Trilogy, he would be a member of the Art Geek gang. Thomas graduated with a Bachelors of Fine Arts from the Rhode Island School of Design and continues to practice and exhibit his realist oil paintings. When he isn't writing or painting out of his home in Los Angeles, he is either watching movies, or watching even more movies. To see a selection of his artwork, visit: www.thomasvoorhies.com"