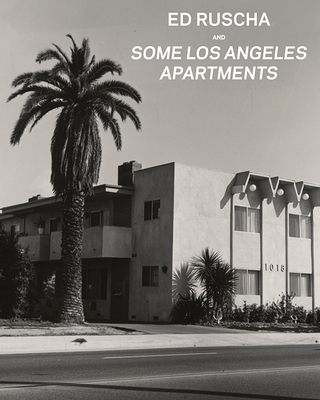 
Not On Our Shelves—Ships in 1-5 Days
Los Angeles–based contemporary artist Ed Ruscha is celebrated for his paintings, drawings, prints, and artist’s books, receiving widespread critical acclaim for more than half a century. Capturing the quintessential Los Angeles experience with its balance of the banal and the beautiful, his photobooks of the 1960s—such as Twentysix Gasoline Stations, Every Building on the Sunset Strip, Some Los Angeles Apartments, and Thirtyfour Parking Lots—are known for their deadpan cataloguing of the city’s functional architecture.

This publication features thirty-eight Ruscha plates and an essay that traces the evolution of the artist’s thinking about his photographs initially as the means to the end of his self-published photobooks and eventually as works of art in and of themselves. Virginia Heckert contextualizes Ruscha’s photographs within the history of photographic documentation of vernacular architecture, using examples by such important photographers as Carleton Watkins, Eugène Atget, and Walker Evans, as well as contemporary photographers, many of whom have acknowledged Ruscha as an influence in their own depiction of the built environment.

Virginia Heckert is curator of photographs at the J. Paul Getty Museum. She is the author of Mario Giacomelli: Figure/Ground (Getty, 2021),
Light, Paper, Process: Reinventing Photography, (Getty, 2015), and Some Aesthetic Decisions: The Photographs of Judy Fiskin (Getty, 2011).
“Concept preceding image is an approach which now dominates contemporary photography, but it wasn’t always so. Victoria Heckert’s book serves as a helpful history lesson.”—Photo-Eye Blog

“An elaboration of Ruscha’s 1965 book, providing a commentary on and superior reproductions of the original black and white photographs.”—Form Magazine

“A slim but essential volume. . . . As such examples of mid-century design disappear or fall into disrepair, the utilitarian clarity of these images make a book like Some Los Angeles Apartments a valuable document, and an unexpectedly moving one. What began as a perhaps ironic concept has, with the passing years, taken on the resonance of something lost to history.”—Spectrum Culture