The Gulf War Chronicles: A Military History of the First War with Iraq (Paperback) 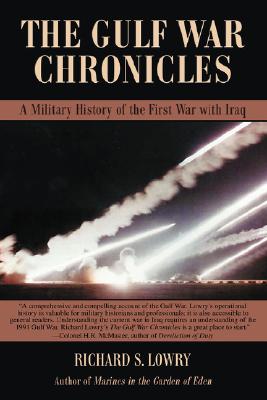 The Gulf War Chronicles: A Military History of the First War with Iraq (Paperback)


Not On Our Shelves—Ships in 1-5 Days
Extensively researched, painstakingly documented, and dedicated to the courageous men and women who fought and served in the First War with Iraq, this is a factual military history of Operation Desert Storm-and the only readable and thorough chronicle of the entire war. From the first night of battle to Day Two, when Saddam struck back, to G Day and the eventual cease-fire, accomplished military historian Richard S. Lowry delivers a detailed, day-by-day account of each battle and every military encounter leading up to the liberation of Kuwait. Desert Storm was a war of many firsts: America's first four-dimensional war; the first time in military history that a submerged submarine attacked a land target; the Marine Corps' first combat air strikes from an amphibious assault ship; the first time in the history of warfare that a soldier surrendered to a robot; and more. And it was an overwhelming victory for the United States and its allies. Intentionally presented without political commentary and ending with a complete listing of the heroic Americans killed in Desert Storm as well as a battle timeline, glossary, bibliography, and resources, The Gulf War Chronicles provides a much-needed understanding of the nature of modern-day, high-tech warfare and honors America's collective resolve and commitment to freedom.