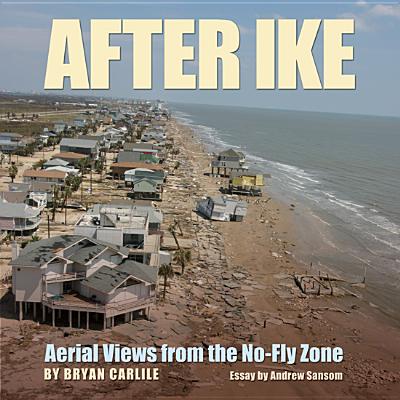 
Special Order—Subject to Availability
The day after Hurricane Ike made U.S. landfall at Galveston, Texas, photographer Bryan Carlile was in a helicopter, working a service contract as a first responder. He took with him a native Texan’s good memories of the Gulf Coast but brought back images that tell the sobering story of this massive and historic storm.  After Ike includes more than one hundred aerial photographs Carlile took of the hurricane’s grim aftermath accompanied by Carlile’s eyewitness captions. In some places, Carlile is able to show images from “before Ike” that bring home the magnitude of the changes wrought to both natural and human habitats.  In a thoughtful, personal essay, Andrew Sansom, who was raised on the Texas coast, reflects on the realities of living in “Hurricane Alley.”
Dividing his time between Houston, Texas, and the Hill Country, BRYAN CARLILE is an aerial photographer and owner of Beck Geodetix, an environmental GIS/GPS mapping consultant firm. Andrew Sansom, executive director of the River Systems Institute at Texas State University and former executive director of Texas Parks and Wildlife, grew up in Lake Jackson, Texas.

"In 'After Ike', Carlile transforms the wrath of Ike that I witnessed from reporting on the ground for KHOU-TV, into a historically significant treasure for all by capturing the depth and breadth of Ike’s destructive forces from the air.   Far more than a book of simple photos, Carlile’s sharp eye and acclaimed skills as an aerial photographer serve as a tour guide, through the eye of an artist, to one of the most destructive hurricanes to ever make landfall."-Mark Greenblatt, investigative reporter, KHOU-TV