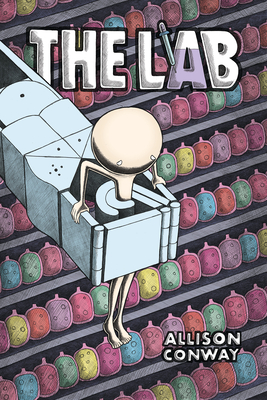 The Lab is a wordless visual journey into the grim machinery of exploitation. Its nameless protagonist is held in solitary captivity, alternately poked, prodded, starved, drugged, and worse. Brief glimpses of other test subjects, undergoing their own ordeals, are few and far between. But is all this abuse and isolation purely arbitrary? Or is there a purpose?

Painstakingly and evocatively rendered, Allison Conway's debut graphic novel explores the spectrum between lifeless gray and vivid color. It asks uncomfortable questions about the treatment we tolerate and the injustices underlying our modern world.
Allison Conway is an illustrator and cartoonist living in Brooklyn, NY. She graduated from the Savannah College of Art and Design with a BFA in Illustration in 2016. She has worked with clients like The New York Times, The Wall Street Journal, The Boston Globe, and Yale University, and for over two years has published a comic strip in Vice about a pillbug named Millie. She grew up in the woods of Lake Geneva, WI and has always had a passion for animals and living organisms of all sizes. The Lab is her first graphic novel.

You can find more of her work at allistrations.com.