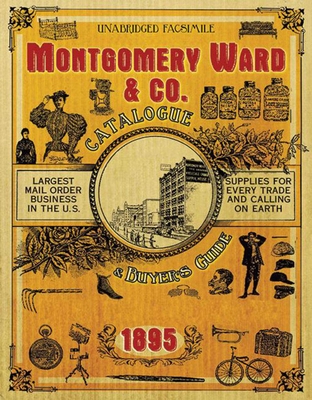 
Special Order—Subject to Availability
"Our mail order methods meet many wants," wrote a poetic but anonymous copywriter on a page of the 1895 Montgomery Ward & Co. catalogue. He had a gift for understatement. At its zenith from the 1880s to the 1940s, Montgomery Ward, like its cross-town Chicago rival, Sears, sold virtually everything the average American could think of or desire—and by mail. This was a revolution, and Ward's fired the first shot. To buy spittoons, books of gospel hymns, hat pins, rifles, wagons, violins, birdcages, or portable bathtubs, purchases that used to require many separate trips to specialist merchants, suddenly all the American shopper had to do was lick a stamp. This unabridged facsimile of the retail giant's 1895 catalogue showcases some 25,000 items, from the necessities of life (flour, shirts) to products whose time has passed (ear trumpets). It is an important resource for antiquaries, students of Americana, writers of historical fiction, and anyone who wants to know how much his great-grandfather paid for his suspenders. It is a true record of an era.
Nick Lyons is a former English professor and book publisher, as well as the author and editor of many books on various topics. He lives in New York City.