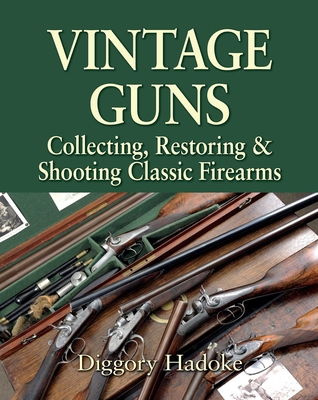 
Special Order—Subject to Availability
At the back of many a gun cabinet lurks a neglected old shotgun. This book will encourage its owner to bring it back into service. A beautiful, fully-illustrated volume, Vintage Guns offers expert advice on collecting guns and restoring them to firing condition—on a reasonable budget. It provides practical tips on buying the right gun for restoration, and gives an honest description of the steps—and potential pitfalls—on the path to renovation. Written for the shooter rather than the historian or engineer, it covers the subject in a lively, informative manner, always with an eye toward heading to the field. Topics covered include safety, servicing and maintenance, ribs and chokes, sidelocks and boxlocks, proofing, ejectors, ammunition, and much more. Originally published under the title (and identical to) Vintage Guns: Collecting, Restoring & Shooting Classic Firearms.
Diggory Hadoke has been involved with British sporting guns since childhood. Hadoke is a regular contributor to several magazines including The Field, Sporting Shooter, Double Gun Journal, and Gun Trade News. His previous books are Vintage Guns for the Modern Shot (2007) and The British Boxlock Gun & Rifle (2012). He is the director of Vintage Guns Ltd., a gun dealership and brokerage specializing in British sporting guns. He has business interests in London and Houston and travels to host shooting parties in Africa on a regular basis. He shoots all quarry on every continent with 1870s hammer guns. Hadoke now lives in Ludlow, England.