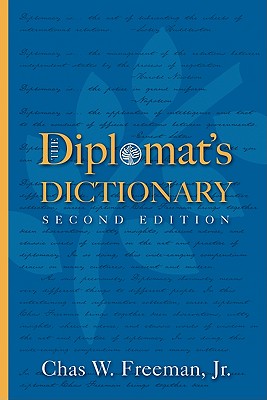 
Not On Our Shelves—Ships in 1-5 Days
Diplomacy is . . .the application of intelligence and tact to the conduct of official relations between governments. Ernest Satowthe art of saying Nice doggie till you can find a rock. Wynn Catlinthe art of relating states to each other by agreement rather than by the exercise of force. Henry A. Kissingerthe continuation of war by other means. Zhou Enlaithe management of the relations between independent states by the process of negotiation. Harold Nicolsonthe police in grand costume. NapoleonWith its first edition in 1994, "The Diplomat's Dictionary" quickly became a classic reference book, offering professionals and enthusiasts practical information, witty insights, and words of wisdom on the art and practice of diplomacy. The expanded second edition contains 476 new entries, including definitions for selected up-to-date terminology and hundreds of additional quotations from across cultures and centuries. Mediators, foreign policy officials, ambassadors, speechwriters, academics, and legislators alike are guaranteed to be inspired and entertained by this unique collection of definitions and quotations.