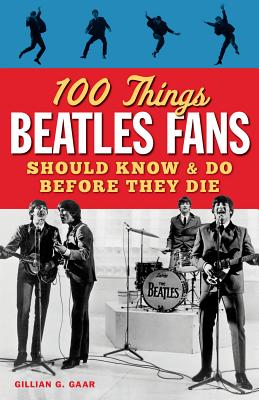 Few music groups have been able to sustain a fan base over half a century that is as significant and devoted as those of the Beatles, and this entertaining guide to all things Fab Four rewards those fans with everything they need to know about the band in a one-of-a-kind format. Packed with history, trivia, lists, little-known facts, and must-do adventures that every Beatles fan should undertake, it ranks each item from one to 100. Fans of any generation will appreciate the songs, albums, places, personalities, and events that are relived and revealed from five decades of Beatles lore.

Gillian G. Gaar is a music historian and journalist whose writing has appeared in Goldmine, Mojo, and Rolling Stone magazines, and a variety of other periodicals as well as the book The Beatles Digest and several Beatles anthologies. She is the author of several books, including She’s a Rebel: The History of Women in Rock & Roll. She lives in Seattle.