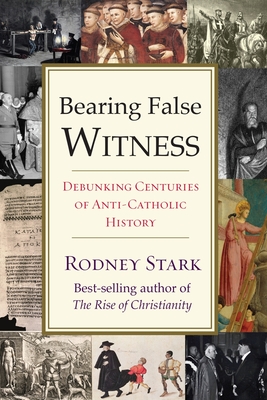 As we all know and as many of our well-established textbooks have argued for decades, the Inquisition was one of the most frightening and bloody chapters in Western history; Pope Pius XII was anti-Semitic and rightfully called “Hitler’s Pope,” the Dark Ages were stunting the progress of knowledge to be redeemed only by the secular spirit of the Enlightenment. The religious Crusades were an early example of the rapacious Western thirst for riches and power. But what if these long held beliefs were all wrong?

In this stunning, powerful, and ultimately persuasive book, Rodney Stark, one of the most highly regarded sociologists of religion and bestselling author of The Rise of Christianity (HarperSanFrancisco 1997), argues that some of our most firmly held ideas about history, ideas that paint the Catholic Church in the least favorable light are, in fact, fiction. Why have we held these wrongheaded ideas so firmly and for so long? And if our beliefs are wrong, what is the truth?

In each chapter, Stark takes on a well-established anti-Catholic myth, gives a fascinating history of how each myth became conventional wisdom and presents a startling picture of the real truth. For example, instead of the Spanish Inquisition being an anomaly of torture and murder of innocent people persecuted for “imaginary” crimes such as witchcraft and blasphemy, Stark argues that not only did the Spanish Inquisition spill very little blood, but it was a major force in support of moderation and justice.

Stark dispels the myth of Pope Pius XII being apathetic or even helpful to the Nazi movement, such as to merit the title “Hitler’s Pope,” and instead shows that the campaign to link Pope Pius XII to Hitler was initiated by the Soviet Union, presumably in hopes of neutralizing the Vatican in post-World War II affairs. Many praised Pope Pius XIIs vigorous and devoted efforts to saving Jewish lives during the war.

Instead of understanding the Dark Ages as a millennium of ignorance and backwardness inspired by the Catholic Church’s power, Stark argues that the whole notion of the “Dark Ages” was an act of pride perpetuated by anti-religious intellectuals who were determined to claim that theirs was the era of “Enlightenment.”

In the end, readers of Bearing False Witness will have a more accurate history of the Catholic Church and will also understand why it became unfairly maligned for so long. Bearing False Witness is a compelling and sobering account of how egotism and ideology often work together to give us a false truth.

Rodney Stark was one of the leading authorities on the sociology of religion. Following a tour of duty in the US Army, Stark received his PhD from the University of California, Berkeley. He held appointments as a research sociologist at the Survey Research Center and the Center for the Study of Law and Society. For many years, the Pulitzer Prize nominee was sociology and comparative religion professor at the University of Washington. In 2004 he became Distinguished Professor of the Social Sciences and codirector of the Institute for Studies of Religion at Baylor University.

Stark authored more than 150 scholarly articles and 32 books in 17 different languages, including several widely used sociology textbooks and best-selling titles like The Rise of Christianity: How the Obscure, Marginal Jesus Movement Became the Dominant Religious Force in the Western World in a Few Centuries; The Triumph of Faith: Why the World is More Religious Than Ever; The Triumph of Christianity: How the Jesus Movement Became the World’s Largest Religion; God’s Battalions: The Case for the Crusades; A Star in the East: The Rise of Christianity in China; The Victory of Reason: How Christianity Led to Freedom, Capitalism, and Western Success; and Bearing False Witness: Debunking Centuries of Anti-Catholic History.

"Rodney Stark gives the last acceptable prejudice a sound thrashing and clears up a lot of confused history along the way. Give this fine book to anyone you know who’s been subjected to ‘social studies.’” —George Weigel, Distinguished Senior Fellow, Ethics and Public Policy Center

“Growing up Catholic in the United States is to hear a constant stream of stuff that, one’s experience shows, is just not true. Still I have always trusted that some unbiased non-Catholic scholar would one day look at the evidence (even its simple logic) again. Little did I imagine that this expected dispassionate historian would be so deeply informed, lucid, thorough, and blunt. Rodney Stark has done justice to neglected historical truth, and I am deeply grateful for his steady toughmindedness. His aim was to honor the truth, so now it remains for historians to look again, face his challenges, and come refreshed to their own verdicts.” —Michael Novak, winner of the Templeton Prize (1994), author of The Spirit of Democratic Capitalism

“A majestically argued, gorgeously written, and essential book by one of the truly indispensable minds of our time. Bearing False Witness is one more gift to history from Rodney Stark. It should in turn be given to and read by students and professors everywhere, whatever their beliefs.” —Mary Eberstadt, author of How the West Really Lost God and It’s Dangerous to Believe

“An elegantly written and lucid overview of the myths and fables produced by what has been described as ‘America’s oldest prejudice.’ Directors of adult educa­tion groups should run out and buy this book.” —Mark Massa SJ, dean, School of Theology and Ministry, Boston College

“If ever there was a book that was going to stir up controversy among historians, scholars of religion, sociologists, and politicians, then Bearing False Witness is it. In it, Rodney Stark rebuts, with his usual mastery of sources and mature judgment, the widespread ‘black legends’ about Catholic violence, bigotry, intolerance, and rejec­tion of modern science. Regardless of whether one agrees with all of his arguments, this book will be a most useful resource for educators and scholars alike, and due to its engaging and lucid style it is a must have for every history lover.” —Ulrich L. Lehner, author of The Catholic Enlightenment

“Those trapped by convention will bristle at Stark's book, but those who attempt to deconstruct their own stance will find here much that resonates. Written in a lively style, Stark’s book will appeal to those interested in the history of Western civilization, Christianity, and culture.” —CHOICE

“Roman Catholics have gotten a bad reputation: they’re responsible for the Dark Ages, the Crusades, and the Inquisition. They’re anti-science, anti-Semites, and anti-freedom. Each of these accusations is an oversimplification that perverts history.”
“According to a new, groundbreaking book by sociologist and historian Rodney Stark, the truth is far more friendly to the Catholic Church, and those who say otherwise are overlooking important developments in the study of history. In Bearing False Witness: Debunking Centuries of Anti-Catholic History, Stark rebuts 10 historical myths that reflect badly on the Catholic church.” —Tyler O’Neil, PJ Media

“Even if you are not Catholic, to understand today’s culture wars, you must understand Catholic history. [T]his book has my highest endorsement for everyone from Catholics to atheists who appreciate brave truth-telling on important topics.” —FrontPage Magazine, Danusha Goska, author of Save Send Delete

“The fallout from these anti-Catholic myths has been extensive and damaging. Stark sets the record straight.” —Kathleen A. Mulhern, Patheos


“Stark writes as an historian, not an apologist; but the truth is not only good history, but also the best defense of the Church.” —Gerald J. Russello, National Catholic Register

“In each chapter, Stark takes on a well-established anti-Catholic myth, gives a fascinating history of how each myth became the conventional wisdom, and presents a startling picture of the real truth.” —Supremacy and Survival

“In Bearing False Witness, Stark crushes anti-Catholic myths one by one with clarity and well-researched scholarship.” —Klaus Vella Bardon, Times of Malta

“Stark has done the Catholic Church a great service in presenting a thorough dismantling of many anti-Catholic narratives, as well as offering analysis as to how and why this happened… Even those outside the parameters of the Catholic Church should welcome this study, as it enables us to move beyond the usual sniping characteristic of so many church history debates, and pursue a more thorough, historically faithful ecumenical dialogue.” —Casey Chalk, Call to Communion


“Bearing False Witness by Rodney Stark is a generous book—though more importantly, a judicious one. Stark is a Protestant who grew up believing many anti-Catholic myths, including that old canard from Washington Irving that Columbus’s voyage had been discouraged by the Church because of her belief that the world was flat. Stark dismantles this quaint piece of ahistorical folklore in his Introduction, then sets his sights on the whole panoply of ‘Black Legends’ maliciously promulgated throughout history to justify bigotry towards Catholics, first by rival denominations (English and Dutch Protestants invented the lurid, baseless cartoon we picture when we hear ‘Spanish Inquisition’) and then by secular forces (I learned here that it was Soviet propagandists who started the lie that Pius XII was ‘Hitler’s Pope’) . . . the book is an across-the-aisle attempt to right some wrongs of Christian historiography” —Alexi Sargeant, First Things