Annapurna: The First Conquest Of An 8,000-Meter Peak (Paperback) 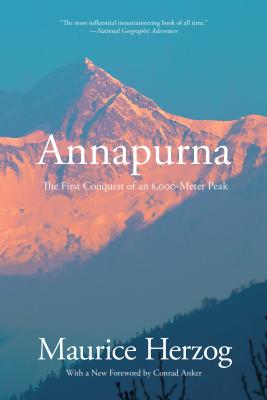 Annapurna: The First Conquest Of An 8,000-Meter Peak (Paperback)


In Stock—Click for Locations
Top 100 Sports Books of All Time, Sports Illustrated "Those who have never seen the Himalayas, those who never care to risk an assault, will know when they finish this book that they have been a companion of greatness."-New York Times Book Review In 1950, when no mountain taller than 8,000 meters had ever been climbed, Maurice Herzog led an expedition of French climbers to the summit of an 8,075-meter (26,493-foot) Himalayan peak called Annapurna. But unlike other climbs, the routes up Annapurna had never been charted. Herzog and his team had to locate the mountain using crude maps, pick out a single untried route, and go for the summit. Annapurna is the unforgettable account of this heroic climb and of its harrowing aftermath, including a nightmare descent of frostbite, snow blindness, and near death. Herzog's masterful narrative is one of the great mountain-adventure stories of all time. This new edition-due for publication shortly before the sixtieth anniversary of the Annapurna ascent on June 3, 2010-will feature a new foreword by Conrad Anker.
Maurice Herzog is a French mountaineer and sports administrator, born on January 15, 1919 at Lyon, France. He was the first person to summit an 8,000-meter peak (Annapurna) in 1950. His accomplishment was surpassed only when Everest was summitted in 1953 by Sir Edmund Hillary and Tenzing Norgay.

The most influential mountaineering book of all time.”

Those who have never seen the Himalayas, those who never care to risk an assault, will know when they finish this book that they have been a companion of greatness.”
New York Times Book Review

Before Everest, there was Annapurna. Frenchman Herzog led the first summitting of an 8,000-meter peak, dictating his story because he had lost all his fingers to frostbite.”
Sports Illustrated

While the ascent is thrilling enough, the harrowing descent . . . truly boggles the mind.”
The Week