Born Under an Assumed Name: The Memoir of a Cold War Spy's Daughter (Hardcover) 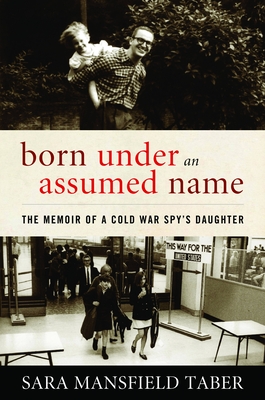 Born Under an Assumed Name: The Memoir of a Cold War Spy's Daughter (Hardcover)


Not On Our Shelves—Ships in 1-5 Days
From literary journalist Sara Mansfield Taber comes a deep and wondrous memoir of her exotic childhood as the daughter of a covert CIA operative. Born under an Assumed Name portrays the thrilling and confusing life of a girl growing up abroad in a world of secrecy and diplomacy—and the heavy toll it takes on her and her father. As Taber leads us on a tour through the alluring countries to which her father is assigned, we track two parallel stories—those of young Sara and her Cold War spy father. Sara struggles for normalcy as the family is relocated to cities in North America, Europe, and Asia, and the constant upheaval eventually exacts its price. Only after a psychiatric hospitalization at age sixteen in a U.S. Air Force hospital with shell-shocked Vietnam War veterans does she come to a clear sense of who she is. Meanwhile, Sara's sweet-natured, philosophical father becomes increasingly disillusioned with his work, his agency, and his country. This is the question at the heart of this elegant and sophisticated work: what does it mean to be an American? In this fascinating, painful, and ultimately exhilarating coming-of-age story, young Sara confronts generosity, greatness, and tragedy—all that America heaps on the world.
Sara Mansfield Taber holds a BA from Carleton College, an MSW from the University of Washington, and a doctorate from Harvard University. She is the author of Dusk on the Campo: A Journey in Patagonia (1992), Of Many Lands: Journal of a Traveling Childhood (1999), and Bread of Three Rivers: The Story of a French Loaf (2002). Her memoirs and essays have been published in the Southwest Review and the Washington Post, and produced for National Public Radio. She has taught at Johns Hopkins University and currently teaches at the Bethesda Writer’s Center and at the Vermont College of Fine Arts. Married with two children, she lives in the Washington, D.C., area.
"Born under an Assumed Name is as delicately wrought as bone china . . . A beautiful, mysterious, and unexpectedly suspenseful story of the struggle to find a place in the world."—William O'Sullivan, editor, Washingtonian

"Taber has worked magic with this intoxicating memoir of her childhood. This vibrant family portrait of love and heartache also reveals much about America—our passion, confusion, contradictions, and especially the tragedy we bring upon the world despite our very best intentions."—Mary Stucky, reporter, Minnesota Public Radio

"Lyrical and evocative prose . . . These tales of coming of age are filled with the exotic flavors of far-flung places but also touch on close-to-the-bone feelings about family and childhood relationships that befall all of us, no matter where we grow up."—Sandra Dibble, reporter, San Diego Union-Tribune

"With a poet's sensibility, a seasoned journalist's sense of where and when to probe, and a ravishing talent for conveying the exotic, Taber's writing is on par with anything by M. F. K. Fisher, Jan Morris, or V. S. Naipaul. Everyone who wants to understand America should read this book."—C. M. Mayo, author of Miraculous Air: Journey of a Thousand Miles through Baja California, the Other Mexico

"A gorgeous and shocking tale . . . Taber's poetic, vivid language bathes us in cultural beauty and harsh realities, her psychological insights into the costs of a clandestine life are fascinating, and her ability to electrify history during the era of 'red devils' make this memoir a sizzling read."—Carole Geithner, author of If Only