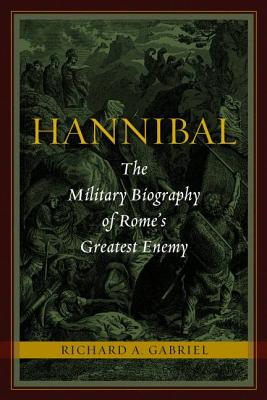 By Richard A. Gabriel


Not On Our Shelves—Ships in 1-5 Days
The Romans’ destruction of Carthage after the Third Punic War erased any Carthaginian historical record of Hannibal’s life. What we know of him comes exclusively from Roman historians who had every interest in minimizing his success, exaggerating his failures, and disparaging his character. The charges leveled against Hannibal include greed, cruelty and atrocity, sexual indulgence, and even cannibalism. But even these sources were forced to grudgingly admit to Hannibal’s military genius, if only to make their eventual victory over him appear greater.

Yet there is no doubt that Hannibal was the greatest Carthaginian general of the Second Punic War. When he did not defeat them outright, he fought to a standstill the best generals Rome produced, and he sustained his army in the field for sixteen long years without mutiny or desertion. Hannibal was a first-rate tactician, only a somewhat lesser strategist, and the greatest enemy Rome ever faced. When he at last met defeat at the hands of the Roman general Scipio, it was against an experienced officer who had to strengthen and reconfigure the Roman legion and invent mobile tactics in order to succeed. Even so, Scipio’s victory at Zama was against an army that was a shadow of its former self. The battle could easily have gone the other way. If it had, the history of the West would have been changed in ways that can only be imagined. Richard A. Gabriel’s brilliant new biography shows how Hannibal’s genius nearly unseated the Roman Empire.
RICHARD A. GABRIEL is a distinguished professor in the Department of History and War Studies at the Royal Military College of Canada and in the Department of Defence Studies at the Canadian Forces College in Toronto. He is a former U.S. Army officer and the author of more than forty books, including Scipio Africanus, Thutmose III, Philip II of Macedonia, Hannibal, and Man and Wound in the Ancient World. He lives in Manchester, New Hampshire.
"Richard Gabriel’s Hannibal is a worthy successor to his books on Subotai, Muhammad, Scipio Africanus, Thutmose III, and Philip of Macedon. Informed equally by the author’s encyclopedic knowledge of antiquity and his own military background, Hannibal is a highly readable military biography of a brilliant tactician who failed to understand the culture of his Roman enemy and thus could win battle after battle, but never the war. Gabriel has once again made a significant contribution to our understanding of warfare in antiquity, one that scholars and general readers will find fascinating.”—Keith Poulter, editor of Military Chronicles

"This work presents a superb blend of biographical narrative, strategic and tactical analysis, and an impressive presentation of source materials to create a comprehensive study of one of antiquity’s greatest commanders. In his latest effort, Gabriel offers new insights and explanations for Hannibal’s successes and ultimate failure, casting one of history’s most famous commanders in a completely new light. This book is a must for anyone with an interest in warfare in antiquity and in the late Roman Republican period."—Christopher A. Matthew, Macquarie University, Australia, and author of A Storm of Spears: A Reappraisal of Hoplite Combat

"In Hannibal, perhaps his best book yet, the distinguished military historian Richard Gabriel examines the life and campaigns of the great Carthaginian general in the Second Punic War. Gabriel explains how Hannibal turned a multicultural mass of Carthaginians, Iberians, Gauls, and others into one of the most effective armies in history, with which he very nearly destroyed the rising power of Rome. Combining a brilliant analysis of the strategic intricacies of the war, and a detailed examination of Hannibal’s strategy and tactics, with a careful analysis of largely overlooked logistical issues, Gabriel has produced a very valuable work of ancient military history that will interest and impress historians and general readers alike."—Albert A. Nofi, contributor for Military Chronicles and author of To Train the Fleet for War