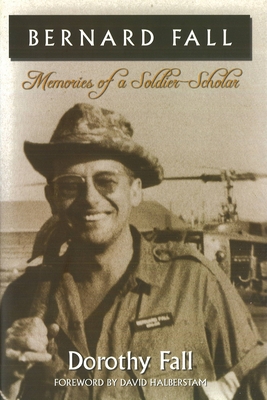 
Not On Our Shelves—Ships in 1-5 Days
Bernard Fall wrote the classics Street Without Joy and Hell in a Very Small Place, which detailed the French experience in Vietnam. One of the first (and the best-informed) Western observers to say that the United States could not win there either, he was killed in Vietnam in 1967 while accompanying a Marine platoon. Written by his widow Dorothy, Bernard Fall: Memories of a Soldier-Scholar tells the story of this courageous and influential Frenchman, who experienced many of the major events of the twentieth century. His mother perished at Auschwitz, his father was killed by the Gestapo, and he himself fought in the Resistance. It focuses, however, on Vietnam and on two love stories. The first details Fall’s love for Vietnam and his efforts to save the country from destruction and the United States from disaster. The second shows a husband and father dedicated to a cause that continuously lured him away from those he loved. With a foreword by the late David Halberstam.
Bernard Fall’s widow, DOROTHY FALL, is a professional artist. She conducted interviews for this book in the United States, France, and Vietnam for thirty years and drew from her husband’s entire correspondence, his autobiographical writings, his notes written in Vietnam, and official U.S. government files revealed here for the first time. She lives in Washington, D.C.
“Dorothy Fall’s charming, intensely personal portrait of her late husband as a man of vision, courage, and great humanitarian instincts adds to our understanding not only of him but also of an era that spans America’s thrusting optimism in the wake of World War II, its self-discovery in the civil rights revolution, and its disillusionment during Vietnam. Bernard Fall fought with the French underground, investigated Nazi war crimes, and became America’s leading scholar on Indochina as well as an outstanding author and journalist. His life was cut tragically short by his pursuit of truth, but he lived it to the brim.”—Jim Hoagland, associate editor, Washington Post

“All students of the Vietnam wars know the works of the great historian Bernard Fall. This poignant and unblinking account reveals the life that propelled him to his monumental and ultimately tragic task.”—Don Oberdorfer, former Washington Post diplomatic correspondent and author of Tet! The Turning Point of the Vietnam War

“This is a tale of two love stories: one for a family, the other for a haunting ‘mistress’—Vietnam. As this memoir by his widow vividly illustrates, it remains appalling that Robert McNamara or any of the ‘best and brightest’ architects of the Vietnam War did not heed Bernard Fall’s brilliant accounts of how and why the French failed in Vietnam. It also reveals the riveting ‘made-for-the-movies’ secret risk-taking life of Fall, who saw his parents perish in the Holocaust, shot Germans as a teenage French resistance fighter, became a courageous and famed journalist, and lost his life in the pursuit of truth.”—Myra MacPherson, author of All Governments Lie! The Life and Times of Rebel Journalist I. F. Stone and Long Time Passing: Vietnam and the Haunted Generation

“Bernard Fall knew the country, the enemy, and the nature of the war better than any person I met during my long involvement in the war in Southeast Asia. . . . His death was a great tragedy to our nation. He had the power, the knowledge, and the ability to influence the policy-makers and just at the time he died, he was on the ascent. His followers were virtually a quiet army, and I’m proud to say I was one of those soldiers.”—Col. David H. Hackworth, U.S. Army (Ret.), author of About Face: The Odyssey of an American Warrior

"Surely the Vietnamese people are not the only ones awaiting Dorothy Fall’s memoir written with her heart about the life of her husband, Bernard Fall. He was a great friend of the Vietnamese people, a fighter who sacrificed himself in the struggle for truth, freedom, and peace on our Earth, which so often is not peaceful.”—Gen. Vo Nguyen Giap, commander of the People’s Army of Vietnam during the Vietnam War

"A captivating book that is equal parts historical primer, personal love story, and eerie reminder of the folly of of waging an unconventional war in an unfamiliar land. . . . It may seem a strange word to use, but this is a lovely book about an important man--important to his adopted country, important to his many friends and to his students . . . and most of all important to his wife and children. It is that last importance that makes this book so sad."—Washington Times