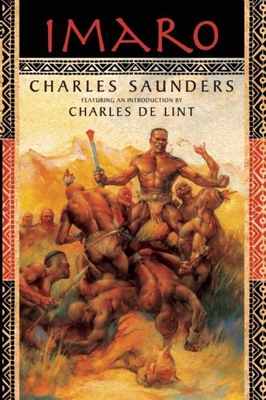 
Not On Our Shelves—Ships in 1-5 Days
Imaro is a rousing adventure... a tale of a young man’s continuing struggle to gain acceptance amongst his people, and to break the cycle of alienation and violence that plagues his life.

Imaro is heroic fantasy like it’s never been done before. Based on Africa, and African traditions and legends, Charles Saunders has created Nyumbani (which means “home” in Swahili), an amalgam of the real, the semi-real, and the unreal. Imaro is the name of the larger-than-life warrior, an outcast, who travels across Nyumbani, searching for a home.

Like his contemporaries, Karl Edward Wagner (Kane) and Michael Moorcock (Elric), Charles Saunders brings something new to the traditional heroic fantasy tale. A broad knowledge of, and passion for, the history and myths of Africa led to the creation of a heroic fantasy character the likes of which the world has never seen. Imaro is no Tarzan… no Conan… Imaro is a warrior out of African legend.

Saunders' novel fuses the narrative style of fantasy fiction with a pre-colonial, alternate Africa. Inspired by and directly addresses the alienation of growing up an African American fan of Science Fiction and Fantasy, which to this day remains a very ethnically homogonous genre. It addresses this both structurally (via its unique setting) and thematically (via its alienated, tribeless hero-protagonist). The tribal tensions and histories presented in this fantasy novel reflect actual African tribal histories and tensions, and provide a unique perspective to current and recent conflicts in Africa, particularly the Rwandan genocide and the ongoing conflict in The Sudan.