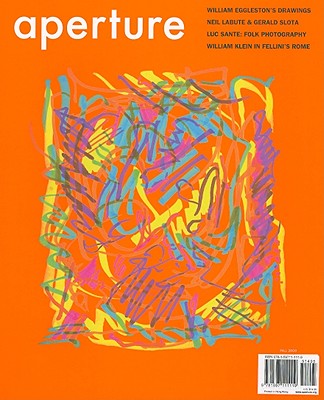 This is book number 196 in the Aperture series.

In the Fall 2009 issue of Aperture, Alessandra Mauro revisits William Klein's seminal visual diary of Rome, a photobook classic now reissued by Aperture. In 1956, Klein explored the city with Federico Fellini, Pier Paolo Pasolini, Alberto Moravia and other avant-garde Italian writers and artists who served as his guides while he was waiting to assist Fellini on his film Nights of Cabiria. During the process, he produced a classic portrait of the city. Acclaimed essayist and poet (and author of Being With Children) Phillip Lopate considers the newest color work from the young American photographer Sally Gall, while Mary-Charlotte Domandi discusses Debbie Fleming Caffrey's impressive career from the early 1970s to the present, including her famous work documenting rural poverty among the workers in the sugarcane fields and sugar mills of Louisiana. Other features include emerging Dutch photographer Rob Hornstra's fascinating project on Russia, as well as an impressive array of work by established, emerging and international practitioners, considered by leading writers in the field. Exhibition reviews include Brian Dillon on Roni Horn, Anthony Downey on contemporary German photography and Holly Brubach on the International Center of Photography's Year of Photography.