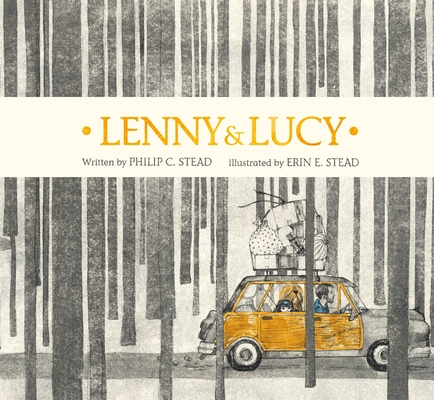 Peter and his father are moving to a new house beyond the dark unfriendly woods. When they arrive at their new home, Peter wants to turn back. Fortunately, he has Harold for company, but Harold is just a dog and can't help Peter. Scared of the things hidden in the woods, Peter makes a tall pile of pillows. He stiches and sews. He pushes and pulls. And when he is done, he has Lenny, Guardian of the Bridge, to protect him and Harold.

Lenny is a good guard but Peter worries that Lenny will get lonely out by the woods all by himself, so he makes Lucy, who is a good friend. Together, Lenny, Lucy, Peter, and Harold discover that this new place isn't so scary after all.

PHILIP C. STEAD is the author of the Caldecott Medal winning A Sick Day for Amos McGee, also named a New York Times Best Illustrated Book of 2010 and a Publishers Weekly Best Children’s Book of 2010, illustrated by his wife, Erin E. Stead (A Neal Porter Book, Roaring Brook Press, 2010).  Philip, also an artist, both wrote and illustrated his debut Creamed Tuna Fish and Peas on Toast (Roaring Brook Press, 2009), which was applauded by School Library Journal for “its wry humor and illustrations worthy of a Roald Dahl creation.”  Philip lives with Erin in Ann Arbor, Michigan.

Erin E. Stead has illustrated several children's books with her husband, Philip C. Stead. Their first picture book, A Sick Day for Amos McGee, won the Caldecott Medal. She has also illustrated And Then It's Spring (written by Julie Fogliano) and contributed to Eric Carle's What's Your Favorite Animal? The Steads divide their time between Ann Arbor, Michigan, and New York City.

“A quiet, comforting tale of finding where you belong.” —Booklist

“Erin Stead uses faded grays for the alien forest and warm, quiet color for the story's living souls. What stands out is the Steads' (Bear Has a Story to Tell) ability to evoke the wordless intimacy and companionship that every child needs-and will make for themselves, if necessary.” —Publishers Weekly, starred review