Hidden: A Child's Story of the Holocaust (Hardcover) 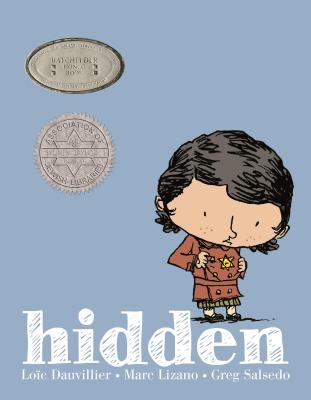 Hidden: A Child's Story of the Holocaust (Hardcover)

In this gentle, poetic young graphic novel, Dounia, a grandmother, tells her granddaughter the story even her son has never heard: how, as a young Jewish girl in Paris, she was hidden away from the Nazis by a series of neighbors and friends who risked their lives to keep her alive when her parents had been taken to concentration camps.

Hidden ends on a tender note, with Dounia and her mother rediscovering each other as World War II ends . . . and a young girl in present-day France becoming closer to her grandmother, who can finally, after all those years, tell her story. With words by Loïc Dauvillier and art by Marc Lizano and Greg Salsedo, this picture book-style comic for young readers is a touching read.

Loïc Dauvillier is above all a book lover. He has penned a great many picture books and comics adaptations of classics (Around the World in 80 Days, Oliver Twist), as well as other more personal and autobiographical works. His books include the graphic novel Hidden.

Marc Lizano has lent his pen to over forty books. Today he is one of the most sought after cartoonists and works in a wide range of styles and genres on graphic novels and picture books for young readers and for adults. Hidden is his most recent graphic novel.

“The graphic novel format helps reinforce the contrast between the dark, scary moments and the happier times.” —The Horn Book

“*Lizano draws people the same way that small children do: a giant oval for the head and two dots for the eyes. But his people always have complicated expressions on their faces. They never show just one emotion . . . No book can sum up all of the Holocaust, but this graphic novel seems to contain every possible human emotion. Remarkably, most of the time, it does it with an oval and two dots.” —Kirkus Reviews, starred review

“A Holocaust experience told as a bedtime story? It sounds crazy, but here it works.” —Booklist