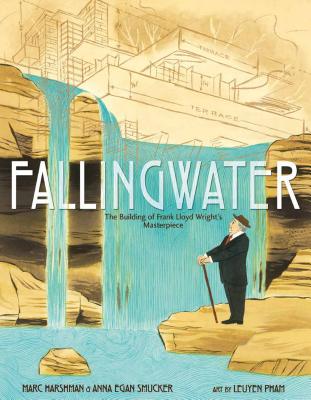 In Bear Run, Pennsylvania, a home unlike any other perches atop a waterfall. The water's tune plays differently in each of its sunlight-dappled rooms; the structure itself blends effortlessly into the rock and forest behind it. This is Fallingwater, a masterpiece equally informed by meticulous research and unbounded imagination, designed by the lauded American architect Frank Lloyd Wright.

This book guides young readers through Wright's process designing Fallingwater, from his initial inspirations to the home's breathtaking culmination. It is a exploration of a man, of dreams, and of the creative process; a celebration of potential. Graceful prose and rich, dynamic illustrations breathe life into the story of Frank and Fallingwater, a man and home utterly unlike any other.

Marc Harshman is the author of a collection of poems, Believe What You Can (West Virginia University Press), and a dozen children’s books, including One Big Family (Eerdmans). His monthly show for West Virginia Public Radio, “The Poetry Break,” began airing in 2016. He was also an invited reader at the 2016 Greenwich Book Festival in London and is the seventh poet laureate of West Virginia.

LeUyen Pham worked in animation before turning to children’s books. She wrote and illustrated Big Sister, Little Sister and The Bear Who Wasn't There, and is the illustrator of numerous other picture books. Ms. Pham lives in Los Angeles, California, with her husband.

Anna Egan Smucker is the author of several children's books including No Star Nights, winner of the International Reading Association Children's Book Award. In addition to writing, reading, and doing author presentations, she loves to hike in the beautiful mountains of her home state of West Virginia.

“Lyrical . . . Filled with brightness and clarity . . . The interplay of creativity and execution are lovingly developed here.” —Bulletin of the Center for Children's Books

“Young builders/dreamers will be inspired by this romantic picture-book account of the conception, design, and construction of the Frank Lloyd Wright house Fallingwater.” —Horn Book