Nothing Can Possibly Go Wrong (Paperback) 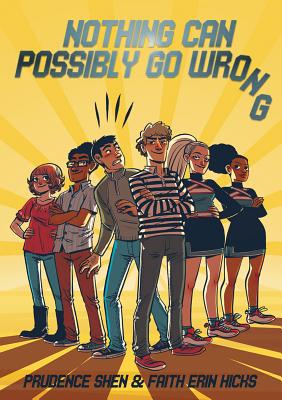 Nothing Can Possibly Go Wrong (Paperback)

You wouldn't expect Nate and Charlie to be friends. Charlie's the laid-back captain of the basketball team, and Nate is the neurotic, scheming president of the robotics club. But they are friends, however unlikely—until Nate declares war on the cheerleaders. At stake is funding that will either cover a robotics competition or new cheerleading uniforms—but not both.
It's only going to get worse: after both parties are stripped of their funding on grounds of abominable misbehavior, Nate enrolls the club's robot in a battlebot competition in a desperate bid for prize money. Bad sportsmanship? Sure. Chainsaws? Why not. Running away from home on Thanksgiving to illicitly enter a televised robot death match? Of course!
In Faith Erin Hicks' and Prudence Shen's world of high school class warfare and robot death matches, Nothing can possibly go wrong.

Prudence Shen is a writer and caffeine addict who pays rent in D.C. even though she mostly lives in airports. Her work includes the Tor.com short story "Do Not Touch" and the graphic novel Nothing Can Possibly Go Wrong (illustrated by New York Times bestselling author Faith Erin Hicks). She loves robots. Not like that.

Faith Erin Hicks is a writer and artist who lives in Vancouver, Canada. Her published works include Friends with Boys, The Adventures of Superhero Girl, The Last of Us: American Dreams (with Neil Druckmann), The Nameless City trilogy, Comics Will Break Your Heart, and the New York Times bestselling Pumpkinheads (with Rainbow Rowell).

“Smart and funny; don't miss this one.” —Kirkus Reviews

“I love Hicks' artwork and I'm excited to see what new author Shen has in store. ” —Wired.com GEEKDAD blog

“Sounds like my kind of thing!” —Cory Doctorow, BOINGBOING.com

“The very first strip is a grabber.” —Heidi MacDonald, THE BEAT.com

“This lightweight romp could be just the ticket for latecomers to comics and GNs.” —BCCB