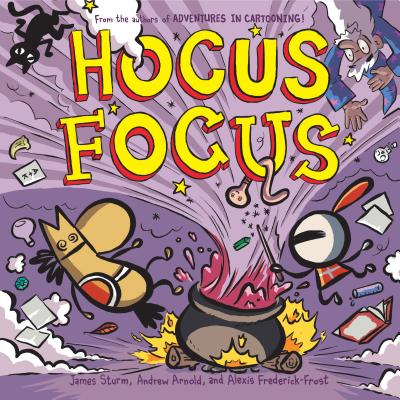 All day long, the Knight peels turnips. This isn’t what she had in mind for her first magic lesson. She wants to make a magic potion, not soup! Things get a lot more exciting when she steals the wizard’s magic wand and spell book. Her potion transforms Edward into a giant worm—and he’s hungry!

Hocus Focus offers more sweet, goofy storytelling from the creators of Adventures in Cartooning. With simple how-to-draw tutorials on the endpapers, these cute picture books are a playful extension of the hit instructional series.

James Sturm is the author of several award-winning graphic novels for children and adults, including James Sturm’s America, Market Day, The Golem’s Mighty Swing and Satchel Paige: Striking Out Jim Crow. He is also the founder of the Center for Cartoon Studies and the National Association for Comics Art Educators.  He created Adventures in Cartooning with collaborators Alexis Frederic-Frost and Andrew Arnold. Sturm, his wife, and two daughters live in White River Junction, Vermont.

Alexis Frederick-Frost is co-author and illustrator of the critically acclaimed Adventures in Cartooning series of graphic novels and picture books. A combination how-to book and exciting adventure story, Adventures in Cartooning: how to turn your doodles into comics, was one of Booklist’s Top Ten Graphic Novel of 2010 and has encouraged hundreds of young artists to create their own comics. He also wrote and illustrated the monthly comic Kit and Clay for The Phoenix Magazine in the United Kingdom and has contributed to a variety of publications online and in print. A graduate from the inaugural class of the Center for Cartoon Studies, Alexis lives with his wife in Maryland.

Andrew Arnold is an author-illustrator and cocreator of the award-winning Adventures in Cartooning series from First Second Books. He is also the founder and editorial director of HarperCollins’s graphic novel imprint. He writes and draws from his home in Brooklyn, New York, in the company of his rescue dog, Jerry. What’s the Matter, Marlo? is his debut picture book.