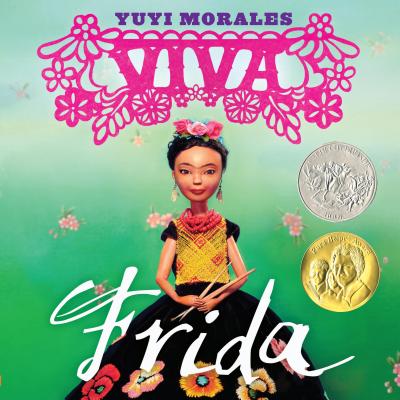 Frida Kahlo, one of the world's most famous and unusual artists is revered around the world. Her life was filled with laughter, love, and tragedy, all of which influenced what she painted on her canvases.

Yuyi Morales is an author/illustrator whose books have won the Pura Belpré Award, the Christopher Award, and the Jane Addams Award. She lives in northern California. Her books include Just In Case, Viva Frida, and Little Night/Nochecita.

“In this exploration of the imagery of artist Frida Kahlo, brief two- or three-word sentences provide dreamlike narration, and mixed-media images follow Frida as she discovers and opens a bright yellow wooden chest, releasing a fantasy in which playfulness leads to a knowledge, love, creativity, and ultimately, to her embrace of life.” —BCCB

“*There have been several books for young readers about Frida Kahlo, but none has come close to the emotional aesthetic Morales brings to her subjects . . . an ingenious tour de force.” —The Horn Book, STARRED REVIEW

“This luminescent homage to Frida Kahlo doesn't hew to her artwork's mood but entrances on its own merit . . . Visually radiant.” —Kirkus Reviews

“*Kahlo's unusual life story, background, and art have made her a frequent topic of biographies. Morales's perception of her creative process results in a fresh, winning take on an artist who has rarely been understood . . . Morales's art and O'Meara's photographs take this book to another level.” —School Library Journal, STARRED REVIEW

“STARRED REVIEW Frida is presented less as a historical figure than as an icon who represents the life Morales holds sacred; Frida lives because she loves and creates.” —Publisher's Weekly