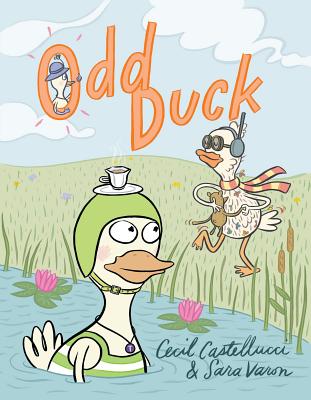 Theodora is a perfectly normal duck. She may swim with a teacup balanced on her head and stay north when the rest of the ducks fly south for the winter, but there's nothing so odd about that.

Chad, on the other hand, is one strange bird. Theodora quite likes him, but she can't overlook his odd habits. It's a good thing Chad has a normal friend like Theodora to set a good example for him.

But who exactly is the odd duck here? Theodora may not like the answer.

Sara Varon (Robot Dreams) teams up with Cecil Castellucci (Grandma's Gloves) for a gorgeous, funny, and heartwarming examination of the perils and pleasures of friendship.

A Kirkus Reviews Best Book of 2013

Sara Varon is a printmaker, graphic novelist, and children's book author/illustrator living in Brooklyn. Her books include Odd Duck, Bake Sale, Robot Dreams, Chicken & Cat, Chicken & Cat Clean Up, Hold Hands, and My Pencil & Me. Her books have received many accolades--among others, Odd Duck was selected by Kirkus Reviews as one of the Best Children's Books of 2013, Bake Sale was named a YALSA Great Graphic Novel for 2012, and Robot Dreams was on Oprah's Kids' Reading List in 2008. In 2013 Sara Varon was a recipient of the Maurice Sendak Fellowship.

Cecil Castellucci's books include Boy Proof (Candlewick, 2005), The Plain Janes (Minx/DC Comics, 2007), The Year of the Beasts (Roaring Brook, 2012), and Tin Star (a 2015 Sunburst Award Winner). She collaborated with artist Sara Varon on Odd Duck, a graphic novel for young readers. She is the YA editor of the Los Angeles Review of Books and a two-time Macdowell Fellow. She lives in Los Angeles.

"This is a beautiful parable about eccentricity, friendship, self-awareness, the majesty of the night sky, and the benefits of balancing a cup of tea on your head (for posture!)." —Boing Boing

“Warm and with solid insight into the nature of quirk, this title will amuse most readers, and it may be a welcome balm for those who feel a bit different.” —School Library Journal, starred review

“Varon's gentle art and Castellucci's nuanced writing combine in a sweet, quiet tale that celebrates the joys of being unique.” —Booklist

“Middle-graders on the verge of dog-eat-dog adolescence may find the idea of oddball pals sticking together a bolstering and affirmative one; the quirky tale may also serve as a nice prompt for a class discussion of friendship or idiosyncratic behavior.” —BCCB