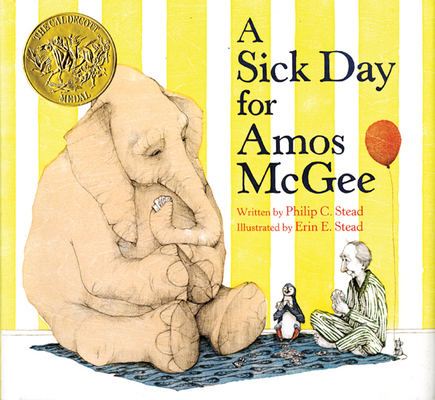 THE BEST SICK DAY EVER and the animals in the zoo feature in this striking picture book debut.

Friends come in all sorts of shapes and sizes. In Amos McGee's case, all sorts of species, too! Every day he spends a little bit of time with each of his friends at the zoo, running races with the tortoise, keeping the shy penguin company, and even reading bedtime stories to the owl. But when Amos is too sick to make it to the zoo, his animal friends decide it's time they returned the favor.

A Sick Day for Amos McGee by Philip C. Stead and Erin E. Stead is a 2011 Bank Street - Best Children's Book of the Year and the winner of the 2011 Caldecott Medal. This title has Common Core connections.

PHILIP C. STEAD is the author of the Caldecott Medal winning A Sick Day for Amos McGee, also named a New York Times Best Illustrated Book of 2010 and a Publishers Weekly Best Children’s Book of 2010, illustrated by his wife, Erin E. Stead (A Neal Porter Book, Roaring Brook Press, 2010).  Philip, also an artist, both wrote and illustrated his debut Creamed Tuna Fish and Peas on Toast (Roaring Brook Press, 2009), which was applauded by School Library Journal for “its wry humor and illustrations worthy of a Roald Dahl creation.”  Philip lives with Erin in Ann Arbor, Michigan.

Erin E. Stead has illustrated several children's books with her husband, Philip C. Stead. Their first picture book, A Sick Day for Amos McGee, won the Caldecott Medal. She has also illustrated And Then It's Spring (written by Julie Fogliano) and contributed to Eric Carle's What's Your Favorite Animal? The Steads divide their time between Ann Arbor, Michigan, and New York City.

“Observant readers will notice tiny surprises hidden in plain sight: a red balloon, a tiny mouse and sparrow popping up here and there in the story. Erin E. Stead, the illustrator, overlays her pencil sketches with gentle tones of pink, peach, blue and green, and bright red spots that belie the deceptive ordinariness of the text.” —The New York Times Book Review

“Thick, creamy paper and a muted palette add to the gentle resonance of a story that ends with everyone tucked in at last for a sweet night's sleep.” —Washington Post

“It's hard to believe that this is Erin Stead's first children's book-her woodcut and oil-ink artwork is so warmly appealing that she seems like an old pro.” —Time Out New York Kids

“Here is a book that exemplifies that happy combination where words and pictures carry equal weight and yet somehow create a whole that defies arithmetic.” —BookPage

“Whether read individually or shared, this gentle story will resonate with youngsters.” —School Library Journal

“Like the story, the quiet pictures, rendered in pencil and woodblock color prints, are both tender and hilarious… The extension of the familiar pet-bonding theme will have great appeal, especially in the final images of the wild creatures snuggled up with Amos in his cozy home.” —Booklist

“If you want to give a child a book that will remain with them always (and lead to decades of folks growing up and desperately trying to relocate it with the children's librarians of the future) this is the one that you want. Marvelous.” —Fuse # 8 blog