The Boy Who Loved Math: The Improbable Life of Paul Erdos (Hardcover) 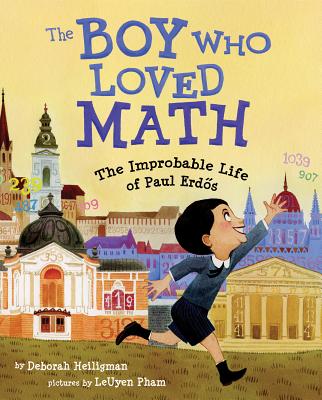 The Boy Who Loved Math: The Improbable Life of Paul Erdos (Hardcover)

Most people think of mathematicians as solitary, working away in isolation. And, it's true, many of them do. But Paul Erdos never followed the usual path. At the age of four, he could ask you when you were born and then calculate the number of seconds you had been alive in his head. But he didn't learn to butter his own bread until he turned twenty. Instead, he traveled around the world, from one mathematician to the next, collaborating on an astonishing number of publications. With a simple, lyrical text and richly layered illustrations, this is a beautiful introduction to the world of math and a fascinating look at the unique character traits that made "Uncle Paul" a great man.
A Kirkus Reviews Best Book of 2013 A New York Times Book Review Notable Children's Book of 2013

Deborah Heiligman has written many books for children, including National Book Award Finalist Charles and Emma: The Darwins' Leap of Faith; Boston Globe-Horn Book Award Winner Vincent and Theo: The Van Gogh Brothers; and The Boy Who Loved Math. She lives with her family in New York City.

LeUyen Pham worked in animation before turning to children’s books. She wrote and illustrated Big Sister, Little Sister and The Bear Who Wasn't There, and is the illustrator of numerous other picture books. Ms. Pham lives in Los Angeles, California, with her husband.

“Erdos's unconventional brilliance shines through on every page, and extensive author and illustrator notes (including Pham's explanations of the mathematical concepts she works into each illustration) will delight readers with even a fraction of Erdos's interest in math.” —Publishers Weekly, starred review

“An infinitely creative and entertaining book.” —The Horn Book

“Pair this with Don Brown's Odd Boy Out (BCCB 10/04) to compare genius eccentricities, or hand it to middle-grade lovers of math puzzles--opened to the notes.” —BCCB