Mattie and the Machine (Paperback) 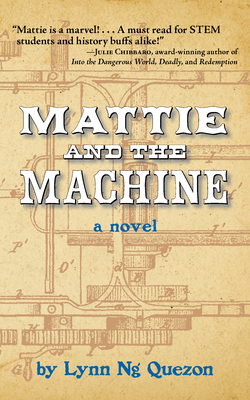 Mattie and the Machine (Paperback)

Mattie and the Machine is a fictionalized yet historically accurate account of Margaret E. Knight's fight to obtain recognition as a 19th century female inventor (she would eventually be inducted into the National Inventors Hall of Fame in 2006). This entertaining tale is filled with romance, competition, and treachery, and features a feisty and brilliant female heroine who excels in STEM-related tasks.

In 1868 New England, fifteen-year-old Mattie is a mechanic in Columbia Paper's all-female bag division. With paper bag sales booming after the Civil War, her boss expands the division by hiring men from his old Army regiment, including the mechanic Frank. Sparks instantly fly between Mattie and Frank, and their budding romance has her walking on air--until she discovers Frank's pay is higher than hers. In fact, all the men receive thirty percent more than their female counterparts. The boss's rationale? Men are inherently better with machines.

Determined to prove him wrong, Mattie proposes a bet: If she can build a machine that fully automates their paper-bag-making process, the women will receive equal pay. If she fails, she'll resign as mechanic. The boss accepts, with one condition: Frank will also build a machine, and Mattie's must beat his.

Mattie's determination as she struggles with the technical challenges she encounters while taking her invention from initial concept to working prototype--in addition to the overwhelming prejudice she faces in the workplace and, eventually, the courtroom--makes her story an inspiring feminist narrative. Mattie and the Machine also includes an appendix with Margaret E. Knight's actual patent application and drawings for her Bag Machine.