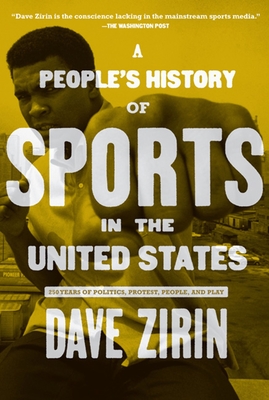 From the author Robert Lipsyte calls the best young sportswriter in America, a rollicking, rebellious, myth-busting history of sports in America that puts politics in the ring with pop culture

In this long-waited book from the rising superstar of sportswriting, whose blog Edge of Sports is read each week by thousands of people across the country, Dave Zirin offers a riotously entertaining chronicle of larger-than-life sporting characters and dramatic contests and what amounts to an alternative history of the United States as seen through the games its people played. Through Zirin's eyes, sports are never mere games, but a reflection of--and spur toward--the political conflicts that shape American society.

Half a century before Jackie Robinson was born, the black ballplayer Moses Fleetwood Walker brandished a revolver to keep racist fans at bay, then took his regular place in the lineup. In the midst of the Depression, when almost no black athletes were allowed on the U.S. Olympic team, athletes held a Counter Olympics where a third of the participants were African American.

A People's History of Sports in the United States is replete with surprises for seasoned sports fans, while anyone interested in history will be amazed by the connections Zirin draws between politics and pop flies. As Jeff Chang, author of Can't Stop Won't Stop, puts it, After you read him, you'll never see sports the same way again.


One of UTNE Reader's "50 Visionaries Who Are Changing Our World," Dave Zirin is a columnist for The Nation, SLAM Magazine, and The Progressive. His many books include A People's History of Sports in the United States, Game Over, Bad Sports, and The Kaepernick Effect (all published by The New Press). Host of Sirius XM's popular weekly show Edge of Sports Radio and a regular guest on MSNBC, CNN, and ESPN, he lives near Washington, DC.