We Built This City (The 8th Continent #4) (Hardcover) 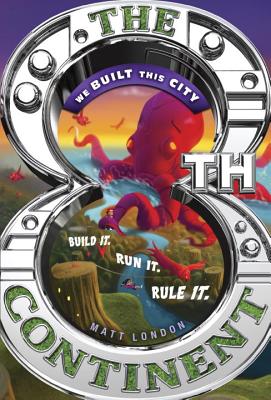 We Built This City (The 8th Continent #4) (Hardcover)

This is book number 4 in the The 8th Continent series.

WHO WILL FINALLY RULE THE EIGHTH CONTINENT, ONCE AND FOR ALL?

In the final action-packed adventure of this series perfect for fans of the Seven Wonders and the Candy Shop War series, Rick and Evie Lane are in an epic battle to take back the eighth continent!

The Lane siblings have done the impossible and they finally have control of the eighth continent. But before the Lanes can finish building their dream city, shadowy corporation Mastercorp shows up with a terrifying weapon: the Anti-Eden Compound, which has the power to instantly turn anything into stinking garbage.

Now, it’s Lanes vs. Mastercorp in an all-out war that will take the siblings from the coldest depths of the ocean to the thickest parts of the jungle. And with evil Mastercorp agents, bullying robot boys, and pesky Winterpole agents on their tails, it's only a matter of time before the Lanes have to make an impossible choice: risk losing their beloved home or unite with their arch enemy Vesuvia Piffle.

In this exciting conclusion to the 8th Continent series, Rick and Evie Lane must rely on every resource they have to save the city – and the home – that they’ve built together.

BUILD IT - RUN IT - RULE IT
at 8thContinentBooks.com
Matt London is a writer, video game designer, and avid recycler who has published short fiction and articles about movies, TV, video games, and other nerdy stuff. Matt is a graduate of the Clarion Writers Workshop, and studied computers, cameras, rockets, and robots at New York University. When not investigating lost civilizations, Matt explores the mysterious island where he lives — Manhattan.