Diloggún Tales of the Natural World: How the Moon Fooled the Sun and Other Santería Stories (Paperback) 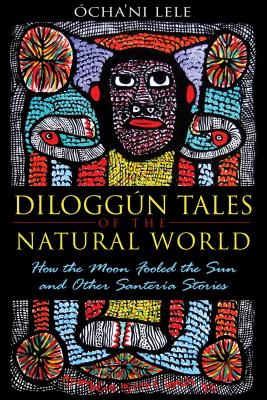 Diloggún Tales of the Natural World: How the Moon Fooled the Sun and Other Santería Stories (Paperback)

• Includes more than 40 myths, stories, and histories from the Lucumí tradition

• Reassembles the oral fragments from the African diaspora into coherent stories

• Demonstrates that the African peoples, specifically the Yoruba, had deep philosophies and metaphysics involving nature and the natural world

Since ancient times the Yoruba of West Africa created sacred stories--patakís--to make sense of the world around them. Upon arrival in the New World, the Yoruba religion began to incorporate elements from Catholic and Native traditions, evolving into Santería, and new patakís were born, adding to the many chapters already found in the odu of the diloggun--the sacred oral teachings and divination system of the Yoruba, or Lucumí, faith. Comparable to the myths of ancient Greece and Rome and rich with jewels of wisdom like the I Ching, these Santería stories are as vast as the Hindu Vedas and as culturally significant as the parables in the Torah, Talmud, and Christian Bible.

Diloggun Tales of the Natural World presents more than 40 patakís that shed light upon the worldview of Santería. Each story in this collection, reassembled from the oral tradition of the African diaspora, is centered on a spiritual principle in nature: the waxing and waning of the moon, solar and lunar eclipses, the phenomenon of shooting stars, the separation of sky and earth, and the origins of the animals and birds who play key roles in Santería symbology. Revealing the metaphysics, theology, and philosophy of the Yoruba people, this volume shows these stories to be as powerful and relevant today as they were to the ancient Yoruba who once safeguarded them.
Author of The Secrets of Afro-Cuban Divination, Ócha'ni Lele (1966-2019) was immersed in the underground culture of Orisha worship in 1989. By 1995 he had received several initiations in both Santeria and the Congo faith Palo Mayombe and in 2000 he made Ocha and was crowned a Santeria priest.
“With brilliant and beautiful narratives, Ócha’ni Lele skillfully navigates the complex stories of the ancient Yoruba people. The myths presented in Diloggún Tales of the Natural World are eternal; equally as profound as those of the Greeks and Romans. With a compelling power akin to the I Ching, this work is well overdue. Finally, we have an author willing to serve up the spiritual beauty of ancient Africa at the table of the modern world. Clearly, there is a legacy beginning to unfold. What a blessing!”
— Iyanla Vanzant, founder of Inner Visions Spiritual Institute and author of Peace from Broken Pieces

“Ócha’ni Lele gives both the initiated and the layperson a true sense of the marvel and mystery within the patakí, the sacred stories of Afro-Cuban Santería. As with previous works, reading Diloggún Tales of the Natural World is like sitting at the feet of an elder while dramatic stories filled with vibrant characters are woven together to reveal universal truths of human existence. These stories, committed to the page, are an invaluable gift to those of us living long distances from our godparents and spiritual homes. Ócha’ni Lele is turning a vast and rich oral tradition--one book at a time--into an eloquently written one. We give thanks to the orisha themselves for choosing him as their messenger.”
— Irete Lazo, author of The Accidental Santeria

“At the heart of Ifa, Lukumi, Santería, and various other Yoruba-influenced traditions in the African diaspora is the diloggún, the complex cowrie-divination ritual by which devotees ascertain the will of the orishas. At the heart of the diloggún are the patakís, stories that elaborate upon and explain the various figures formed by the falling shells. Ócha’ni Lele has put much of this oral tradition in print, offering us an invaluable view into the complexity and beauty of Yoruba mythology and culture. Like most fairy tales, these legends are simple but carry deep and profound truths: Diloggún Tales of the Natural World is a book that has something to offer adherents, scholars, and curious neophytes alike.”
— Kenaz Filan, author of The New Orleans Voodoo Handbook and The Haitian Vodou Handbook

“A must-read for any student of spirituality. Like paintings of the wall of a cave, these stories illuminate a rich history of oral traditions with thought provoking tales of faith and humanity. Ochani’s parables invoke another world...”
— Darryl Stephens, author of Shortcomings and actor

“This is a major scholarly achievement, which also happens to have great appeal as a unique consumer product.”
— Retailing Insight, August 2011

“. . . a wonderful and long-overdue addition to the world’s mythology and cultural history.”
— Spirituality-and-Religion.com, October 2011

“Ócha’ni Lele writes in the lyrical style of the storyteller. The collection is a string of pearls, seemingly simple, but each has its own luminous beauty. The book is of value to practitioners of Santeria, but also highly recommended to anyone who enjoys folktales from around the world. It’s a goldmine for storytellers and for those who include storytelling in rituals or at campfires. Read silently or aloud, this is a marvelous story collection.”
— Elizabeth Hazel, Facing North April 2012

“Anyone interested in the folk tales and oral traditions of other cultures should snap up this book. Contained within are charming stories of personified natural forces, foolish mortals and gods of all levels of power and wisdom. Think Aesops’s fables with a Yoruban twist.”
— Witches’ Almanac, December 2013

“Ócha’ni Lele’s Diloggún Tales of the Natural World is a historic glimpse into the beauty and power of the Lukumi religion. Readers will not only find this book educational and inspirational but deeply transformative.”
— Ifalade Ta’Shia Asanti, senior book reviewer at Urban Spectrum newspaper

“Diloggún Tales of the Natural World is essential reading for anyone interested in the myths and superstitions of Cuba and the Caribbean. This book is entertaining and extremely informative, especially when explaining the role religion played during and after the African slave trade.”
— Xaviant Haze, author of The Suppressed History of America