Magic and the Power of the Goddess: Initiation, Worship, and Ritual in the Western Mystery Tradition (Paperback) 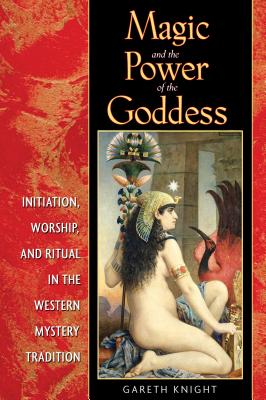 Magic and the Power of the Goddess: Initiation, Worship, and Ritual in the Western Mystery Tradition (Paperback)

• Includes rituals, exercises, and techniques for evoking the Goddess

In this wide-ranging view of magic and ritual, Gareth Knight demonstrates the presence of the Goddess throughout Western esoteric traditions. From Greek myths and the Mysteries of Isis to the emergence of the cult of the Blessed Virgin and seventeenth-century Rosicrucian spiritual alchemy, he shows how the Goddess--the elemental consciousness of Earth--has revealed herself in different times and places.

Honoring her many guises, Knight explores the powers of the Goddess as maiden, mother, initiator, protector, sorceress, and faery queen. Guided meditations on each of these qualities lead the practitioner into direct contact with the potent healing energy of the Divine Feminine. The author also offers rituals, exercises, and other practical tools for integrating the Western magical tradition with worship of the Goddess. He shows how we, and our planet, have suffered due to the repression of the feminine principle. For our own health, and that of our environment as well, we must recognize the power of the Goddess within to reconstitute and guide our existence.
Gareth Knight has spent a lifetime unearthing and teaching the principles of magic as a spiritual discipline and method of self-realization. He was trained in the esoteric school founded by Dion Fortune and has been actively involved in the Western magical tradition since the early 1960s. He is the author of thirty books, including Tarot and Magic, A Practical Guide to Qabalistic Symbolism, and Magic and the Power of the Goddess. He lives in England.
"This book is must-reading for those interested in goddess power. Well-written, it will educate you and entertain you at the same time! Congratulations to the author, Gareth Knight, on a job well-done."
— Lee Prosser, ghostvillage.com, Sep 2008

"Over the years, Gareth Knight has been very much an innovator and opener of new ways in the Western Mysteries. At a time when this stuff was generally reserved for secret lodge meetings and when many groups frowned upon individual thought and inner work, he was one of the first to encourage people to meet and practice magic in living rooms and public workshops. Magic and the Power of the Goddess--perhaps the best in the list of impressive titles that have flowed from Knight's prolific pen--is very much an expression of this original, initiating spirit."
— Colestone Y.H. Brown, reviewer, May 08

"If you've got the intellect and self-discipline to pursue this branch of magic, you'll find the work in this book enormously rewarding."
— Barbara Ardinger, PanGaia: A Pagan Journal for Thinking People, Summer 2008