Secret Societies and the Hermetic Code: The Rosicrucian, Masonic, and Esoteric Transmission in the Arts (Paperback) 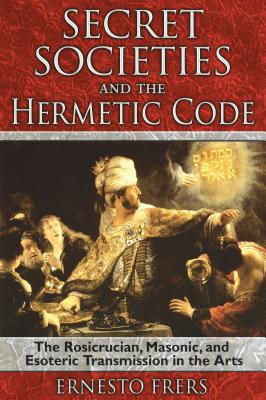 Secret Societies and the Hermetic Code: The Rosicrucian, Masonic, and Esoteric Transmission in the Arts (Paperback)


Not On Our Shelves—Ships in 1-5 Days
A look into secrets hidden in music, painting, sculpture, and architecture

• Ranges from paintings of Byzantine icons to Salvador Dali, music from Mozart to Satanic Rock, and mystery sites from the Pyramids to Andrea Palladio’s Villa Cornaro

In Secret Societies and the Hermetic Code, Ernesto Frers presents a virtual museum of artistic works that contain occult secrets. The scope of his research ranges from the paintings of Byzantine icons to Salvador Dali, from mystery sites such as the Pyramids to the architecture of Andrea Palladio’s Villa Cornaro. He also discusses the hermetic influence on music evidenced in the works of Mozart through to the modern era of rock and roll.

Frers explains that all cultures encode in their architecture, art, and music the instructions and diagram of their esoteric ritual and faith. He shows how during the Middle Ages and Renaissance, the Church’s severe censure of anything antithetical to its dogma forced artists to conceal mystical references within the religious images or scenes they depicted. By examining works that have not received such scrutiny before, including those of Titian, di Cosimo, Botticelli, and Rembrandt, Frers brings to light the symbols and cryptic messages hidden in these masterworks. He presents his evidence using more than 100 color and black-and-white images to reveal the mysteries contained in these works of art. He also extends his investigation to the occult leanings of modern-day musicians such as the Beatles, the Rolling Stones, and Led Zepplin.
Ernesto Frers is an author specializing in medieval history who has investigated enigmatic and occult subjects for many years. He has published widely in his field, is the author of Templar Pirates and Secret Societies in the Hermetic Code, and also the author of a number of works of fiction. He lives in Spain.
"Renowned researcher Ernesto Frers translates the ancient, occult language in this blockbuster book. . . ."
— Gina Barlow, Sun publication

" . . . full-color photos literally peppered throughout for a pageant of display and visualization. Perfect not just for new age collections, but for art library holdings, as well."
— The Midwest Book Review, July 2008

"This book intends to bring together a selection of those great works that allow for a double or triple reading, forming a kind of secret museum that the reader can visit virtually, with the aid of the illustrations that accompany the text."
— Bruno Gazzo, editor, Pietre-stones Review of Freemasonry, Oct 2009

"This is a virtual secret museum in the palms of your hands."
— Rahasya Poe, Lotus Guide magazine, Issue No. 33, Jan/Feb/Mar 2010