Paperbacks from Hell: The Twisted History of '70s and '80s Horror Fiction (Paperback) 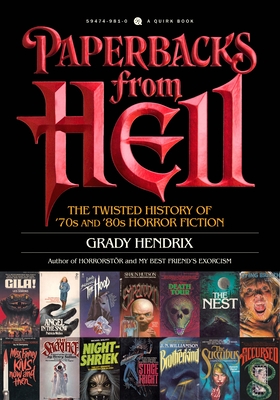 Paperbacks from Hell: The Twisted History of '70s and '80s Horror Fiction (Paperback)


Not On Our Shelves—Ships in 1-5 Days
From the New York Times best-selling author of The Southern Book Club's Guide to Slaying Vampires comes a nostalgic and unflinchingly funny celebration of the horror fiction boom of the 1970s and ’80s.

Horror author and vintage paperback book collector Grady Hendrix offers killer commentary and witty insight on these trashy thrillers that tried so hard to be the next Exorcist or Rosemary’s Baby. Complete with story summaries and artist and author profiles, this unforgettable volume dishes on familiar authors like V. C. Andrews and R. L. Stine, plus many more who’ve faded into obscurity.

Also included are recommendations for which of these forgotten treasures are well worth your reading time and which should stay buried.
Grady Hendrix is an award-winning and New York Times best-selling novelist and screenwriter living in New York City. He is the author of Horrorstör, My Best Friend’s Exorcism (which is being adapted into a feature film by Amazon Studios), We Sold Our Souls, The Southern Book Club’s Guide to Slaying Vampires, and The Final Girl Support Group. Grady also authored the Bram Stoker Award–winning nonfiction book Paperbacks from Hell and These Fists Break Bricks: How Kung Fu Movies Swept America and Changed the World.
One of SFFWorld's Best of the Decade

“Paperbacks from Hell is as funny as it is engaging.”—The Washington Post

“The book is a true appreciation of the genre.”—Los Angeles Times

“Just thumbing through these pages will bring back your youth—and terrify you all over again.”—Newsday

“A loving examination of lurid pulp book covers from the 1970s and ’80s.”—Atlas Obscura

“Paperbacks from Hell is as wild as its source material.”—The A.V. Club

“[Paperbacks from Hell] will delight anyone with an interest in horror, design illustration, or the macabre.”—Print Magazine

“You may find yourself trying to stock up on old titles so you can get your fill of gloriously trashy scares.”—Bustle

“[Hendrix's] love of the genre shines through as he pokes gentle fun at some of the era's more entertaining reads, and speaks with genuine appreciation of other titles whose horrors stand the test of time.”—BookRiot

“Hendrix’s darkest novel yet will leave readers begging for an encore.”—Booklist, starred review, on We Sold Our Souls

“Clever, heartfelt, and get-under-your-skin unnerving.”—Fangoria, on My Best Friend’s Exorcism

“A good, creepy, music-tinged thriller.”—CNET, on We Sold Our Souls