Paper Love: Searching for the Girl My Grandfather Left Behind (Paperback) 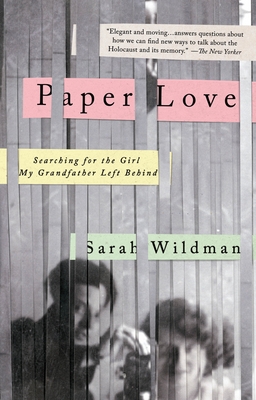 Paper Love: Searching for the Girl My Grandfather Left Behind (Paperback)


Not On Our Shelves—Ships in 1-5 Days
One woman’s journey to find the lost love her grandfather left behind when he fled pre-World War II Europe, and an exploration into family identity, myth, and memory.

Years after her grandfather’s death, journalist Sarah Wildman stumbled upon a cache of his letters in a file labeled “Correspondence: Patients A–G.” What she found inside weren’t dry medical histories; instead what was written opened a path into the destroyed world that was her family’s prewar Vienna. One woman’s letters stood out: those from Valy—Valerie Scheftel—her grandfather’s lover, who had remained behind when he fled Europe six months after the Nazis annexed Austria.

Valy’s name wasn’t unknown to her—Wildman had once asked her grandmother about a dark-haired young woman whose images she found in an old photo album. “She was your grandfather’s true love,” her grandmother said at the time, and refused any other questions. But now, with the help of the letters, Wildman started to piece together Valy’s story. They revealed a woman desparate to escape and  clinging to the memory of a love that defined her years of freedom.

Obsessed with Valy’s story, Wildman began a quest that lasted years and spanned continents. She discovered, to her shock, an entire world of other people searching for the same woman. In the course of  discovering  Valy’s ultimate fate, she was forced to reexamine the story of her grandfather’s triumphant escape and how this history fit within her own life and in the process, she rescues a life seemingly lost to history.

Sarah Wildman has reported across Europe and the Middle East for The New York Times, Slate, and The New Yorker, among other publications, and is a former New Republic staffer. She is the recipient of the Peter R. Weitz Prize from the German Marshall Fund of the United States, “for excellence and originality in reporting on Europe and the transatlantic relationship,” for the series in Slate where Paper Love originated. Wildman lives in Washington, D.C.
"This elegant and moving memoir tells the story of the author’s search through Eastern Europe for Valerie Scheftel, the lover her grandfather left behind when he fled Nazi persecution, in 1938. Scheftel seems to have vanished into the Nazi machine, but Wildman obsessively tracks down any record she can find in the hope of piecing together the story. In doing so, Wildman, who belongs to the third generation of Holocaust writers, and the final generation to have contact with survivors, turns a family story into a universal, historical one, and answers questions about how we can find new ways to talk about the Holocaust and its memory."—The New Yorker

"In Paper Love, Sarah Wildman isn’t only on a quest to discover the fate in Nazi Germany of a young and brilliant woman whose moving letters she finds among her beloved grandfather’s papers after his death—though that quest is fascinating and suspenseful. She also draws narrative drama from wrestling with the genre itself: as she knows, and as the many guides whom she gets help from remind her, the pursuit of family Holocaust 'stories that have no ending' has become something of an American staple. Wildman’s prose bristles with ambition and ambivalence, as she challenges the myth of her grandfather’s triumphant odyssey, yet also can’t resist looking (in vain) for a “happy Holocaust story” in the girl left behind."—The Atlantic

"A hidden trove of letters sparks Sarah Wildman's feat of historical detective work, Paper Love, which probes her family's 'myth of a spotless escape' from Europe in 1938—and recaptures the voice of a young woman doctor caught in a tightening web, and the textures and emotions of her vanished world."—Vogue

"Wildman meticulously pieces together the brave and tragic life of the woman her grandfather left behind when he fled Austria on the eve of World War II."—O, The Oprah Magazine

"In the abyss of one of history’s greatest tragedies, does one person’s story matter? This is the question at the heart of Sarah Wildman’s Paper Love, a memoir of chasing a ghost—specifically, the ghost of Valy Scheftel, a woman Wildman’s grandfather left behind when he miraculously escaped Nazi-occupied Vienna. . . . The growing obsession with the mystery woman is the memoir’s catalyst. It sends Wildman on a journey across Europe and against time, trying to trace Valy’s life while Holocaust survivors still live, the window of opportunity as slight as her grandfather’s shot at getting out of Nazi territory before he was captured. Her impeccable research structures the book as a historical narrative on the annexation of Europe and the psychological torture of the Jewish people as hope was slowly extinguished. . . . Only by taking the time to wonder and mourn the extinguishing of a single brilliant, magical existence can we comprehend the millions of others. In Paper Love, Wildman does not bring us the story of a race that is doomed. She shines a light on its boundless potential."—Bustle

"Sarah Wildman's Paper Love [is] a gripping memoir about her grandfather, his escape from Austria on the eve of its annexation by the Nazis, and a family secret. . . . Compelling."—Conde Nast Traveler

"Ignore anyone who tells you there is nothing more to be said about the Holocaust, and no new ways of telling the tragedy. Sarah Wildman's gripping, tender, beautifully painful book gets to the heart of the matter through matters of the heart. And along with the pathos and pain, there is profound and honest thoughtfulness too. "—Simon Schama, author of The Story of the Jews

"For someone like Sarah Wildman, who enjoyed what is now termed die Gnade der späten Geburt(the good fortune of being born too late), the telling of the story of Karl, Valy, and Hans Fabisch involved more than an enormous amount of research in several countries and various languages, interviewing both experts and contemporaries of Karl and Valy, persuading them to open up. It also required a measure of empathy seldom displayed by writers dealing with a period so different from their own. I thought it could not be done and half-tried to persuade her (as she relates) not to undertake the effort. I am glad she ignored my advice. For by telling the story of three individuals from among the millions who were exiled or slaughtered she has made a major contribution towards the understanding of this whole tragic period in recent history."—Walter Laqueur,Jewish Review of Books

"In her riveting family history, Paper Love, Wildman tracks down her grandfather’s story and discovers that there are no simple truths from that time, and definitely no easy answers."—Minneapolis Star-Tribune

“I am totally under Sarah Wildman’s spell.  Paper Love is simply harrowing.  I loved this book.”—Andre Aciman, author of Out of Egypt

"This memoir/biography is as much about the author’s investigation as it is about her subject: The girlfriend her grandfather left behind when he escaped the Nazis to America. . . . Wildman proves that third-generation Holocaust survivors have a worthy angle, and that an ending seen coming can still manage to knock you out."—Heeb

"Imagine going through your grandparents’ old things and finding a mysterious file labeled 'Correspondence: Patients A–G.' That’s exactly what happened to author Sarah Wildman, who discovered a stack of letters in the file that were written to her grandfather in pre–WWII Vienna. Paper Love is Wildman’s journey to piece together the story of the mysterious woman her grandfather left behind in Europe."—Bustle

"This profound book derives its power not so much from the love story at its heart, but from the historical urgency with which Wildman infuses it. The author makes clear that only by engaging with inherited past trauma deeply and fully can individuals and communities begin the long and difficult process of looking for ways to regain wholeness. A poignant and humane memoir."—Kirkus

"Wildman’s extensive investigation into her grandfather’s history is well documented and analyzed, but it is her determination to find out what happened to Valy, a woman at the periphery of the family circle, that distinguishes this family history. The author’s gradual realization that others cared about Valy’s fate, too, led her to a larger understanding of the unbearable circumstances and decisions faced by everyone involved, even those lucky enough to establish new lives elsewhere."—Library Journal (starred)

"Wildman’s intimate and mesmerizing biography blends her family history into the larger framework of World War II and the Holocaust."—Publishers Weekly

"Wildman's personal investment in this Holocaust-era narrative heightens the tension and raises the emotional stakes as her investigation unfolds."—Booklist

"Paper Love is a Holocaust memoir, a survivor's tale and a detective story all at once. . . . In an increasingly digital age, I was staggered by Wildman's description of the paper records that still exist, accounting for thousands of people both lost and found. Paper Love is an intimate portrait of a woman caught in the Nazi net—a woman who might have been forgotten without Wildman's efforts. In telling Valy's story, Wildman reflects on the stories we tell about our own pasts, what we include and what—and who—we leave out."—Bookpage

“In this captivating and elegantly written book, Sarah Wildman uses the story of a single, fascinating but utterly normal woman to illuminate the tragedy of the millions murdered during the Holocaust. Though the themes are universal—family, memory, myth—what makes this remarkable book shine is the way Wildman brings to life a person lost to history, making us care desperately both for her and for her vanished world.”—Ayelet Waldman, author of Love and Treasure"In spellbinding prose, Sarah Wildman traces her quest to understand what happened to her grandfather’s mysterious lover whom he had to leave behind when he fled Vienna in 1938. Revealing deeper truths about history and the tricky nature of memory, Paper Love is a breathtakingly powerful and beautiful new book.”—David Grann, author of The Lost City of Z

"Paper Love begins with a quest for a lost lover, and then radically inverts that path.  Here the search becomes a tale of not one person, but of how each person is so much more than one, how no single life has meaning without all the others that encircle it. Wildman's spellbinding story, with its dramatic and unexpected twists, breathes each forgotten person back to life.”—Dara Horn, author of The World To Come

“Sarah Wildman is a member of the last generation of young Jews who grew up in families presided over by Holocaust survivors and their stories—both the reliable tales and the necessary myths. Wildman long ago turned her attention to the complex afterlife of the Holocaust, and this book—thoroughly researched, adventurously reported, and vulnerably written—has fulfilled her promise as the most important literary representative of her generation.”—Gideon Lewis-Kraus, author of A Sense of Direction

"[Paper Love] powerfully touches on issues of memory, loss and identity—that of both subject and author."—Jewish Woman Magazine