The Invention of Air: A Story Of Science, Faith, Revolution, And The Birth Of America (Paperback) 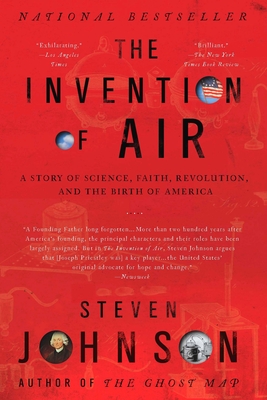 The Invention of Air: A Story Of Science, Faith, Revolution, And The Birth Of America (Paperback)


Special Order—Subject to Availability
From the bestselling author of How We Got To Now, The Ghost Map and Farsighted, a new national bestseller: the “exhilarating”( Los Angeles Times) story of Joseph Priestley, “a founding father long forgotten”(Newsweek) and a brilliant man who embodied the relationship between science, religion, and politics for America's Founding Fathers.

In The Invention of Air, national bestselling author Steven Johnson tells the fascinating story of Joseph Priestley—scientist and theologian, protégé of Benjamin Franklin, friend of Thomas Jefferson—an eighteenth-century radical thinker who played pivotal roles in the invention of ecosystem science, the discovery of oxygen, the uses of oxygen, scientific experimentation, the founding of the Unitarian Church, and the intellectual development of the United States. As he did so masterfully in The Ghost Map, Steven Johnson uses a dramatic historical story to explore themes that have long engaged him: innovative strategies, intellectual models, and the way new ideas emerge and spread, and the environments that foster these breakthroughs.
Steven Johnson is the author of seven bestsellers, including Future Perfect, Where Good Ideas Come From, The Invention of Air, The Ghost Map, and Everything Bad Is Good for You, and is the editor of the anthology The Innovator’s Cookbook. He is the founder of a variety of influential websites—most recently, outside.in—and writes for Time, Wired, The New York Times, and The Wall Street Journal. He lives in Marin County, California, with his wife and three sons.