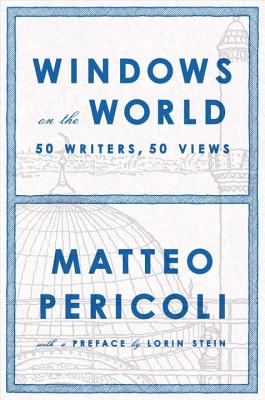 
Special Order—Subject to Availability
Fifty of the world’s greatest writers share their views in collaboration with the artist Matteo Pericoli, expanding our own views on place, creativity, and the meaning of home

All of us, at some point in our daily lives, have found ourselves looking out the window. We pause in our work, tune out of a conversation, and turn toward the outside. Our eyes simply gaze, without seeing, at a landscape whose familiarity becomes the customary ground for distraction: the usual rooftops, the familiar trees, a distant crane. The way of life for most of us in the twenty-first century means that we spend most of our time indoors, in an urban environment, and our awareness of the outside world comes via, and thanks to, a framed glass hole in the wall.

In Windows on the World: Fifty Writers, Fifty Views, architect and artist Matteo Pericoli brilliantly explores this concept alongside fifty of our most beloved writers from across the globe. By pairing drawings of window views with texts that reveal—either physically or metaphorically—what the drawings cannot, Windows on the World offers a perceptual journey through the world as seen through the windows of prominent writers: Orhan Pamuk in Istanbul, Daniel Kehlmann in Berlin, Chimamanda Ngozi Adichie in Lagos, John Jeremiah Sullivan in Wilmington, North Carolina, Nadine Gordimer in Johannesburg, Xi Chuan in Beijing. Taken together, the views—geography and perspective, location and voice—resonate with and play off each other.

Working from a series of meticulous photographs and other notes from authors’ homes and offices, Pericoli creates a pen-and-ink illustration of each window and the view it frames. Many readers know Pericoli’s work from his acclaimed series for The New York Times and later for The Paris Review Daily, which have a devoted following. Now, Windows on the World collects from Pericoli’s body of work and features fifteen never-before-seen windows in one gorgeously designed volume, as well as a preface from the Paris Review’s editor Lorin Stein. As we delve into what each writer’s view may or may not share with the others’, as we look at the map and explore unfamiliar views of cities from around the world, a new kind of map begins to take shape.

Windows on the World is a profound and eye-opening look inside the worlds of writers, reminding us that the things we see every day are woven into our selves and our imaginations, making us keener and more inquisitive observers of our own worlds.
Matteo Pericoli was born in Milan, where he graduated from the Polytechnic School of Architecture. He moved to New York in 1995, where he has worked as an architect, illustrator, author, journalist, and teacher. He now lives with his wife and daughter in Turin, Italy, where he teaches architecture to creative writing students at the Scuola Holden. His books include Manhattan Unfurled and The City Out My Window.
Los Angeles Review of Books:
“At their best, the drawings and texts in Windows on the World make writers real and human…while still leaving room for mystery and fantasy.”

Library Journal:
“[Windows on the World] is a great read for those interested in the lives of writers, lovers of memoir, and anyone with a touch of wanderlust. A fun conversation starter and introduction to writers from around the world.”