A Jane Austen Education: How Six Novels Taught Me About Love, Friendship, and the Things That Really Matter (Hardcover) 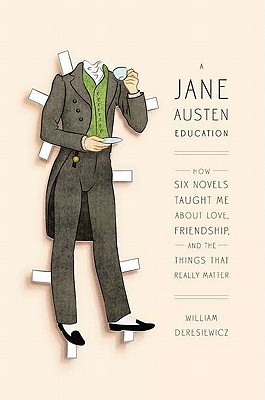 A Jane Austen Education: How Six Novels Taught Me About Love, Friendship, and the Things That Really Matter (Hardcover)

“Austen lovers, rejoice! This intelligent, lively look at the beloved author's novels and what they offered in life lessons to one graduate student will resonate with all Austen fans - and others as well. Like many of us, Deresiewicz, an Austen scholar, found deep lessons on life, love, friendship, and marriage in the pages and parlors of dear Jane's books. A delightful read!”
— Christine Grabish, MacDonald Book Shop, Estes Park, CO

An eloquent memoir of a young man's life transformed by literature.
In "A Jane Austen Education," Austen scholar William Deresiewicz turns to the author's novels to reveal the remarkable life lessons hidden within. With humor and candor, Deresiewicz employs his own experiences to demonstrate the enduring power of Austen's teachings. Progressing from his days as an immature student to a happily married man, Deresiewicz's "A Jane Austen Education" is the story of one man's discovery of the world outside himself.
A self-styled intellectual rebel dedicated to writers such as James Joyce and Joseph Conrad, Deresiewicz never thought Austen's novels would have anything to offer him. But when he was assigned to read "Emma" as a graduate student at Columbia, something extraordinary happened. Austen's devotion to the everyday, and her belief in the value of ordinary lives, ignited something in Deresiewicz. He began viewing the world through Austen's eyes and treating those around him as generously as Austen treated her characters. Along the way, Deresiewicz was amazed to discover that the people in his life developed the depth and richness of literary characters-that his own life had suddenly acquired all the fascination of a novel. His real education had finally begun.
Weaving his own story-and Austen's-around the ones her novels tell, Deresiewicz shows how her books are both about education and themselves an education. Her heroines learn about friendship and feeling, staying young and being good, and, of course, love. As they grow up, they learn lessons that are imparted to Austen's reader, who learns and grows by their sides.
"A Jane Austen Education" is a testament to the transformative power of literature, a celebration of Austen's mastery, and a joy to read. Whether for a newcomer to Austen or a lifelong devotee, Deresiewicz brings fresh insights to the novelist and her beloved works. Ultimately, Austen's world becomes indelibly entwined with our own, showing the relevance of her message and the triumph of her vision.
Watch a Video
WILLIAMDERESIEWICZ is a widely published book critic and the author of "Jane Austen and the Romantic Poets." He was nominated for National Magazine Awards in 2008, 2009, and 2011 and the National Book Critics Circle s Nona Balakian Citation for Excellence in Reviewing in 2010 and 2011.

“Like Austen, Deresiewicz is lucid, principled and knows how to think as well as how to feel, without ever sacrificing one to the other…. a delightful and enlightening book. —SLATE

“An entertaining and original version of literary criticism—as autobiography.” —THE SEATTLE TIMES

“With A Jane Austen Education, Deresiewicz writes with discerning wit and quiet perception about the lessons in friendship, empathy, honesty, happiness, and love he learns from each of Austen's immortal novels.” —CHICAGO TRIBUNE

“[Deresiewicz] is charming on the page. He talks about literary characters as if they were real people, and about Austen as if she lived at the end of the block…he does so in a style that comes across as fresh and conversational, like a genuinely witty bibliophile you’d like to talk with at a party." —LOS ANGELES REVIEW OF BOOKS

“[Deresiewicz] writes with wit, charm and candor, and the result is simply delightful." —ASSOCIATED PRESS