Dark Nights in the Castle of the Prince (Large Print / Paperback) 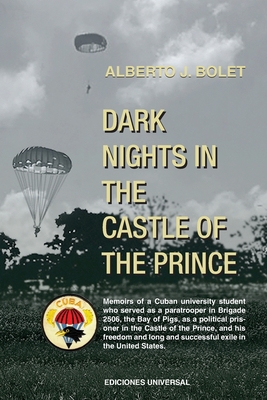 Dark Nights in the Castle of the Prince (Large Print / Paperback)

Alberto J. Bolet was born in Vedado, Havana, Cuba, on December 14, 1941. In this book, written as a legacy for his children and grandchildren, he describes his childhood, the events leading to the Cuban revolution, his exile in Miami and life as a University student, and how he was recruited by the CIA. He gives a detailed description of life in the training camps in Guatemala and how he was trained as a Paratrooper in the Brigade 2506 that invaded Cuba at Playa Giron in April of 1961.

The story of the Brigade's combat experience, including the almost suicidal air war, is not well known in the US, much less their ordeal in Cuban prisons for 20 months until their eventual exchange for medicine and food on Christmas 1962.

There is also a detailed analysis of the policy failures leading to the defeat of the invasion and the brutal elimination of the counter-revolutionary movement by Castro and Soviet forces. Bolet's brother in law was part of that struggle in the Escambray Mountains and his story is also presented in this book.

After attending and receiving degrees from several universities (University of Miami, American University, Georgia State University) Bolet started and directed his own software and consulting business, was Deputy Director of IT for a Major Defense contractor, worked for a Big 8 consulting company and was IT director for a major communications manufacturing company. Upon retiring as a partner for a major consulting firm, he tutored college level and high school children in Mathematics, Physics, Chemistry, Statistics, Languages and Accounting. He has been married to his wife Margarita for 50+ years, has four children and nine grandchildren.