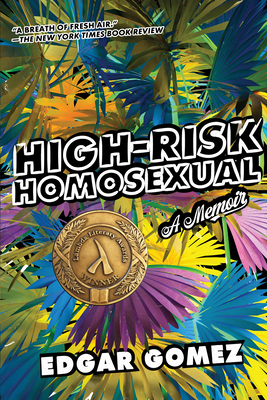 By Edgar Gomez
List Price: $17.95
Our Price: $16.95
(Save: $1.00 6%)
On Our Shelves Now at:
This witty memoir traces a touching and often hilarious spiralic path to embracing a gay, Latinx identity against a culture of machismo—from a cockfighting ring in Nicaragua to cities across the U.S.—and the bath houses, night clubs, and drag queens who help redefine pride

I’ve always found the definition of machismo to be ironic, considering that pride is a word almost unanimously associated with queer people, the enemy of machistas . . . In a world desperate to erase us, queer Latinx men must find ways to hold on to pride for survival, but excessive male pride is often what we are battling, both in ourselves and in others.

A debut memoir about coming of age as a gay, Latinx man, High-Risk Homosexual opens in the ultimate anti-gay space: Edgar Gomez’s uncle’s cockfighting ring in Nicaragua, where he was sent at thirteen years old to become a man. Readers follow Gomez through the queer spaces where he learned to love being gay and Latinx, including Pulse nightclub in Orlando, a drag queen convention in Los Angeles, and the doctor’s office where he was diagnosed a “high-risk homosexual.”

With vulnerability, humor, and quick-witted insights into racial, sexual, familial, and professional power dynamics, Gomez shares a hard-won path to taking pride in the parts of himself he was taught to keep hidden. His story is a scintillating, beautiful reminder of the importance of leaving space for joy.
Edgar Gomez is a Florida-born writer with roots in Nicaragua and Puerto Rico. A graduate of University of California, Riverside’s MFA program, he is a recipient of the 2018 L. M. and Marcia McQuern Graduate Award in Non-Fiction Writing. His work has been published and anthologized widely in such outlets as Popsugar, Longreads, Narratively, The Rumpus, and Ploughshares. He lives in Queens, New York, where he is saving up for good lotion.
Named a Best Book of the Year by BuzzFeed, Electric Literature, and Publishers Weekly
The Millions, A Most Anticipated Book of the Year
Times of India, A Most Anticipated LGBTQ+ Book of the Year

"A breath of fresh air . . . Gomez writes with a humor and clarity . . . Gomez’s voice is equal parts warmth and acid wit, like a good friend you’re slightly afraid of . . . An exciting debut from an author with a rare point of view. High-Risk Homosexual deals with some titanic questions. What is Latinidad? What is machismo? What does it mean to be a man, never mind a queer man? By its own admission, the book doesn’t have all the answers, but it makes a compelling case that they will come from the razor-sharp queers living in the margins." —John Paul Brammer, The New York Times Book Review

"A very funny memoir that sits on my fireplace mantel with more-pages-than-is-useful earmarked—the universally accepted sign of a great book."—Justin Krajeski, NBC News

"I loved this memoir so much. Gomez had me crying and laughing while also taking deep breaths throughout the pages." —Lupita Aquino, TODAY

"Gomez's compelling memoir of embracing his gay, Latinx identity in a world that so often prizes neither takes the reader on a whirlwind tour from a Nicaraguan cockfighting ring to a drag queen convention in Los Angeles and far beyond." —Emma Specter, Vogue

"Gomez explores his upbringing and coming to terms with his identity in a series of humorous essays." —Alamin Yohannes, Entertainment Weekly

"The catalogue page for this debut memoir lists a number of things you can expect to find within the book’s contents. Among them are 'Maybelline foundation shade: Rich Tan,' 'A baby wailing in an ancient Jesuit language,' and 'The most famous woman in the world.' If that doesn’t entice you to read Gomez’s account of figuring out how to embrace his queer identity amid a culture of machismo, I’m not sure what will." —Keely Weiss, Harper's Bazaar, A Best LGBT Book of the Year

"Laughs abound in this book, as do sharp confrontations with what we risk living in the margins." —Matt Ortile, Esquire

"High-Risk Homosexual is a book that will stick with readers." —Sarah Neilson, Shondaland

"Gorgeous and hilarious." —Sophia June, NYLON, A Most Anticipated Book

"Outstanding . . . Throughout this impressive memoir [Gomez] writes candidly and with great dexterity about the joys and fears that grounded his innocent childhood and continue to inform and empower his adulthood." —Jim Piechota, The Bay Area Reporter

"This memoir is good: author Edgar Gomez’s literary wandering makes it feel much like an honest conversation with readers . . . An affable book with just enough seriousness." —Terri Schlichenmeyer, Washington Blade

"Hilarious and touching . . . Edgar Gomez's tone is personal, heartfelt, and introspective, with a healthy dose of humor." —David Vogel, BuzzFeed

"Heartbreaking, funny, and vulnerable . . . Gomez expertly captures what it means to be on the cusp of embracing your full, queer self when the world doesn’t want you to do so." —Eva Recinos, B*tch

"Excellent . . . A journey not without difficulties, but also not without saving grace." —Rigoberto González, On the Seawall

"Gomez’s vulnerable and humorous voice gives strength to High-Risk Homosexual. And yes, while this highly personal memoir is written through the unique lens of a femme-queer-Latinx, there is a universal narrative that will resonate with anyone who has ever felt marginalized. No matter how we identify or where we end up, ultimately, we are all high-risk, and Gomez captures this universality so well. Shantay." —Trey Burnette, Los Angeles Review of Book

“A riotously funny and poignant debut by a quick-witted new voice . . . Displaying a masterful blend of humor, personal reflection, and thoughtful commentary on Latinx culture, Gomez’s first work is as good as it is largely due to its emotional sincerity, its willingness to examine the mistakes and lessons learned just as closely as it does the triumphs . . . This book—open, anguished, brimming with humanity—is, above all, a work of hope.” —Isabella Pilotta Gois, Latino Book Review

"With alternating notes of gut-wrenching emotion and humor, High-Risk Homosexual chronicles not only Gomez’s coming-of-age and coming out, but also his choppy navigation of a culture and family that refused to accept him . . . Gomez’s incandescent prose flickers with an intensity that illuminates his insecurities, his disappointments, and his courage." —Henry L. Carrigan Jr., BookPage

"Poignant, vivid, and often hilarious, this coming-of-age memoir fearlessly explores intersectional identity and shows what it means to live and love authentically as a gay man today . . . An engagingly candid memoir from a promising young writer." —Kirkus Reviews