Romeo: The Story of an Alaskan Wolf (Paperback) 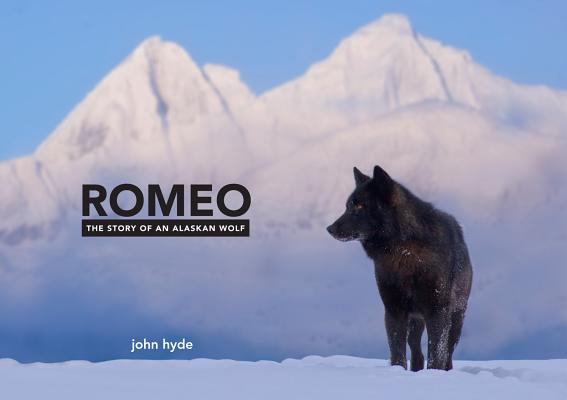 Romeo: The Story of an Alaskan Wolf (Paperback)


Special Order—Subject to Availability
Romeo: The Story of an Alaskan Wolf is about a single black wolf that changed a community forever. Romeo had a playful and loving soul that residents of Juneau, Alaska simply could not ignore and many adopted him as part of their community. Orphaned and alone, Romeo chose his territory below the Mendenhall Glacier close to the town of Juneau, and made his winter home in the Upper-Valley and along the shorelines of the nearby Lakes where he played with his cousins - the dogs that accompanied their owners as they snow-shoed and skied throughout his territory every winter. For John Hyde, Romeo was more than a friend, and much much more than the lone wolf he photographed every winter for nearly a decade along the lake shores, on the flanks of Mount McGinnis, and on the many trails that lead up and down this mountainous and stunningly beautiful area of Alaska. He writes in his Preface to the book: The first time I met Romeo face to face, close enough that we could stare into each other's eyes, I felt I was sitting on the edge of two worlds: one so wild and free I might never be able to comprehend its true significance, the other civilized, which I was driven to escape from on a regular basis. As he recounts Romeo's life from a tragic and violent beginning through to its equally tragic end at the hands of humans for whom he posed no threat, the author writes in the tradition of Aldo Leopold and seeks to describe the kind of redemption and hope that Romeo provided us with as an example of how we humans might recon­sider the baleful and destructive nature of our attitudes toward our wild fellow creatures and the wilderness that is our heritage too. Romeo shared our world to our delight and without malice. We, on the other hand, are often too busy thoughtlessly destroying wilderness habitats in Alaska and elsewhere. Romeo's life, the life of a wild carnivore, as it is described in this book in both clear and  scientific language, was unique. He lived on the edge of the wilder­ness and of our so called civilization, where the two often clashed both in benign and more aggressive ways. When they did it was often his gentle behavior that illuminated our own human igno­rance and latent aggression toward his or any another wild species. Romeo: The Story of an Alaskan Wolf is also the book of a remark­able photographer whose portraits of the wild and of Romeo in particular are as unique as the subject himself. The book is a tribute to an animal whose life came to be treasured by those who knew him and whose life now stands as a challenge to us all in our strug­gle for a better and more sustainable planet.
JOHN HYDE is a photographer, cinematog?rapher and artist who lives in Juneau, Alaska. His work has appeared in countless maga?zines and many films.