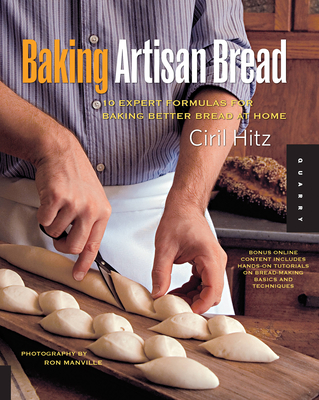 Baking Artisan Bread provides an unintimidating, formula-based approach to baking bread at home. With step-by-step, photo-illustrated instructions, chef Ciril Hitz shows you how with just 10 formulas you can create more than 30 different breads.

After a full exploration of the ingredients, equipment, and techniques of bread baking, move confidently into the kitchen to bake a range of bread types with easy-to-follow recipes for these doughs:

Once you’ve mastered these staples, expand your repertoire with variations on each formula. Baguette dough yields a bouquet of breadsticks, buttery brioche becomes an elegant fruit Danish, challah transforms into delicately flavored orange aniseed wheels, and so on—deliciously.

Baking bread is fun, but the fruits of the labor are often copious. Ciril comes to the rescue with some basic recipes that include bread as a main ingredient, including bread crumbs, croutons, bagel chips, French toast, and bread pudding. A second set of extras includes formulas to help make your bread creations sing, with washes and glazes as well as ideas for sweet and savory embellishments to guide your culinary creativity.

With simple ingredients and most of the equipment needed already in the kitchen, you’ll be filling your home with the heavenly aroma of baking bread in no time!

Ciril Hitz is the Department Chair for the International Baking and Pastry Institute at Johnson & WalesUniversity in Providence, Rhode Island. He graduated from the Rhode Island School of Design, after which he returned to his native Switzerland and completed a three-year apprenticeship as a Pastry Chef/Chocolatier. He was first introduced to bread baking while in Europe, which laid the foundation for the skills that led him to where he is today. Hitz has been recognized nationally and internationally with numerous awards and accomplishments. He was selected as a Top Ten Pastry Chef in America in both 2007 and 2008 by Pastry Art & Design magazine. In 2004, he competed in the National Bread and Pastry Team Championship, winning the overall team Gold Medal as well as all individual bread awards. He was a member of the Bread Bakers Guild Team USA that competed at the 2002 Coupe du Monde de la Boulangerie in Paris, France, where the team captured the silver medal. He has been a guest instructor and expert at many national and international culinary events and schools and serves on the Advisory Board of the Bread Bakers Guild of America. Ciril Hitz is frequently seen on The Food Network and has been featured on the NBC's The Today Show. His work has graced the pages of numerous magazines and the interiors of exhibition halls and museums, including COPIA in Napa, California. For more information on his work, visit breadhitz.com.