The Moment Before the Music Begins: A T.E.A.M. Approach to Song Study (Paperback) 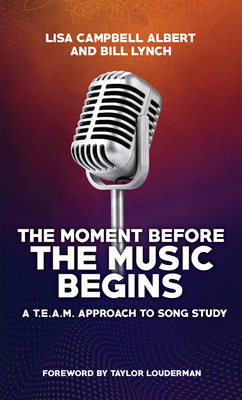 The Moment Before the Music Begins: A T.E.A.M. Approach to Song Study (Paperback)


Not On Our Shelves—Ships in 1-5 Days
For over twenty-five years Lisa Campbell Albert and Bill Lynch have been collaborating on and in Musical Theatre; working in professional productions, conducting workshops, teaching song study, and coaching both professional and aspiring Musical Theatre artists.

Over the years (and the occasional beers), they maintained an ongoing dialogue. They noticed that they were both almost invariably drawn to the same artists. So they asked each other the simple question “why?” What was it that these artists had, or perhaps more importantly, what was it that these artists did that compelled Lisa and Bill to both become involved with the song?

Originally from Seaford, Long Island, NY, Bill Lynch received his Bachelor of Arts in Theatre from University of Maryland, College Park campus and his Master of Fine Arts in Acting from Florida State University/Asolo Conservatory for Actor Training in Sarasota, FLA. Recently, Bill retired as Professor Emeritus from the faculty of Webster University Conservatory of Theatre Arts. During his tenure, Bill taught acting, text analysis, vocal production, speech/dialects, and song study. Bill is a recipient of the William T. Kemper Award for Excellence in Teaching. Originally from Belleville, IL, Lisa Campbell Albert received her Bachelor of Music from Southern Illinois University in Edwardsville, IL and her Master of Music from Webster University in St. Louis, MO. Presently, Lisa serves as an Adjunct Associate Professor on the faculty of Webster University Conservatory of Theatre Arts where she teaches song analysis and vocal coaching. Previously, she resided on faculty in both Performing Arts Dept and Music Dept at Washington University where she received the ArtSci Council Faculty Award for Excellence in Teaching. Taylor Louderman made her Broadway debut originating the role of Campbell Davis in Bring It On: The Musical by Lin Manuel Miranda, Tom Kitt, and Amanda Green. She went on to play Lauren in Kinky Boots on Broadway, and most recently originated the role of Regina George in Tina Fey's Mean Girls on Broadway, for which she received a 2018 Tony Nomination for Best Actress in a Musical. Television credits include: 'Tami' on NBC's Kenan alongside Kenan Thompson, The Good Fight (CBS), Sunny Day (NickJr), Evil (CBS), Peter Pan Live (NBC), and High Maintenance (HBO). She is the co-founder of WRITE OUT LOUD Project: a nonprofit songwriting competition for new Musical Theatre songwriters. Taylor is a volunteer and Board Member at Ozark Actors Theatre in Rolla, MO where she participated in her first professional show at the age of ten. She teaches Musical Theatre workshops and private lessons regularly.
“Now actors, singers, and dancers have a clear and concise process for improving their craft in Musical Theater. T.E.A.M works!” —Christine Knoblauch-O'Neal, PhD Director, MFA in Dance Performing Arts Department Washington University in St. Louis

"The idea is superb. I wish I’d had a book like this to give to my students when I taught the class." —Stephen Brown, Professor of Music, Emeritus, Southern Illinois University at Edwardsville, IL

“When I have worked and watched young talent for the past decade I have felt the connection to the material was usually the biggest downfall of what was missing. T.E.A.M hits all the major points that seem so easy yet are often overlooked. Lisa and Bill bring an expertise and relatable approach that will be a game-changer for all who invest in this concept.” —J. Jason Daunter, Broadway and Educational Theatre Professional