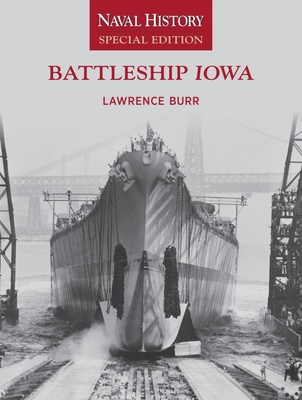 
Coming Soon—Pre-Order Now
USS Iowa BB-61, the first of four Iowa-class battleships built for the U.S. Navy, was launched in 1942. Capable of thirty-three knots and armed with nine new fifty-caliber sixteen-inch guns, she was the pinnacle of battleship design for the U.S. Navy during World War II. The Iowa class perfectly merged the heavy armor of battleships with the speed of battlecruisers. Iowa's speed and heavy armament positioned her to accompany and protect U.S. Fast Carrier task forces through the Pacific War by participating in multiple actions from Truck, the Philippine Sea, Leyte, and ending in Tokyo Bay. Deactivated in 1948, the outbreak of the Korean War saw Iowa recommissioned in 1951 for shore bombardment duty in support of United Nation troops against the North Korean army invasion. Iowa returned to the U.S. in 1952, and then participated in NATO exercises until she was decommissioned in 1958. Soviet expansion and rearmament programs in the 1970's saw Iowa recommissioned in 1984 following a two-year modernization program. This program saw the addition of nuclear capable Tomahawk and Harpoon missiles and modern computer-based communication technology. Extensive exercises with NATO forces and goodwill visits carried through until April 1989, when tragedy struck the ship with an explosion in gun turret two killing 47 crew members. The soundness of Iowa's design and her armored strength prevented the explosion from reaching her magazines and the potential loss of the ship. Decommissioned in October 1990 and placed in reserve, she would eventually be stricken from the Navy record in 2006. Transferred to the Port of Los Angeles in 2012, Iowa now serves as the National Museum of the Surface Navy located at San Pedro, California.
Lawrence Burr returned to the U.S. after a 30-year career as an international executive in Europe, Asia, and Australia. Lawrence partnered with Innes McCartney, approached Channel 4 in the UK and originated and co-produced the documentary JUTLAND-Clash of the Dreadnoughts. He has now authored six books on naval history.