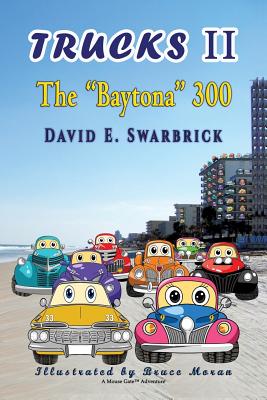 Get ready race fans Let's put on those fire suits and climb inside Strap yourselves in Raise your window nets and crank up them engines Because, The "Baytona" 300 is about to begin

Once a year the Fast Truck Series heads to the most popular beach on the planet for the running of the world-famous spectacle. Known throughout the land as the "2-mile Sand Slinger," the track and event never fails at entertaining fans all over, of all ages, and it always delivers in producing some of the wildest racing in Motorsports Veteran teams and newcomers alike, arrive, qualify, and compete in a grueling 150-lap chase to the checkered flag Each season, crews set the slicks aside and roll out the boggers for the spectacle, trucks put on their goggles, dig in their paddles, and the rooster tails fly high Throughout the history of the sport, the 300 has made champions of some, defeated others, and it has given inspiration to those who felt the odds were against them. Not too long ago, Hale Danhard had a race mishap and nearly gave up; Daisy May was told she was too young, and a sharp and highly confident El Camino with a bright future ahead of him, fell short of his goals. While all the trucks and teams give it their best, only one is ever the victor. Who'll take home the trophy this time? Will it be, the points leader, Beverly Joe Breece, Daisy May, a.k.a. "The Kid," Mike Brian, Stinger Martin, "The Newcomer," or the recent winner of The "Oil Cup" 400, Al Hartman? I guarantee whoever it is, the excitement will have you pinned in your seats as soon as the green flag falls So, what are you waiting for? Hop in and hold on tight Mash the throttle down and blast through those gears Snug in close to the wall and read along with your family and friends Clutch that wheel until the very end, and see who brings home the bacon at one of the toughest and lively competitions around Be sure to fill your tanks, and let's go dune racing by the sea