Out of Sight: The Los Angeles Art Scene of the Sixties (Hardcover) 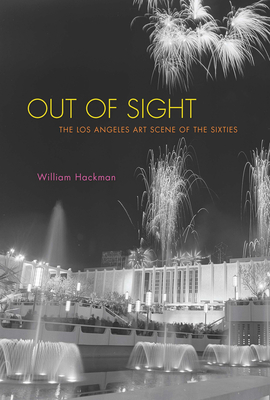 Out of Sight: The Los Angeles Art Scene of the Sixties (Hardcover)

A social and cultural history of Los Angeles and its emerging art scene in the 1950s, 60s, and 70s

The history of modern art typically begins in Paris and ends in New York. Los Angeles was out of sight and out of mind, viewed as the apotheosis of popular culture, not a center for serious art.
Out of Sight chronicles the rapid-fire rise, fall, and rebirth of L.A.’s art scene, from the emergence of a small bohemian community in the 1950s to the founding of the Museum of Contemporary Art in 1980. Included are some of the most influential artists of our time: painters Edward Ruscha and Vija Celmins, sculptors Ed Kienholz and Ken Price, and many others.

A book about the city as much as it is about the art, Out of Sight is a social and cultural history that illuminates the ways mid-century Los Angeles shaped its emerging art scene—and how that art scene helped remake the city.

William Hackman is a former managing editor at the J. Paul Getty Trust and a longtime arts journalist who has written extensively about art, music, and theater for general audiences. His essays, articles, and reviews have appeared in major American newspapers and magazines, including the Chicago Tribune, thePhiladelphia Inquirer, and the Los Angeles Times. The author of two previous books—The Los Angeles County Museum of Art, for the Art Spaces series (Scala: 2008); and Inside the Getty (J. Paul Getty Trust: 2008)—Hackman lives in Los Angeles.

“It has the texture of life as it is actually lived...One of [Outs of Sight’s] chief pleasures is Hackman’s careful and extensive use of the voluminous oral histories that have been recorded over decades by artists, dealers, critics, collectors, curators and more, and which are archived at UCLA, the Smithsonian Institution’s Archives of American Art and elsewhere. The author also has a personal trove of interviews he conducted, some more than 25 years ago. Sundry distinct voices are stitched together to shape the unfolding narrative.” —Los Angeles Times

“[A] fascinating new history of the 1960s Los Angeles art scene… Hackman has written [LA] it back in [to the story].” —The Guardian US Online

“A deeply absorbing account of the midcentury years during which Los Angeles’s once-marginal art scene transformed into a prominent locus of the avant-garde....The author’s prose is engaging, infused with deft turns of phrase...A thoroughly researched history of a great city’s creative zeitgeist, recalling a time when art and artists were more accessible; this will appeal to anyone interested in contemporary art.” —Library Journal

“William Hackman’s Out of Sight is an intelligent, incisive, never-facile account of the California art scene and its romantic beginnings in the ’50s and ’60s. Read this book if you want to know about Ken Price, Vija Celmins, Ed Ruscha, and Bruce Nauman or, in other words, if you want to know about America’s coolest artists.” —Deborah Solomon, author of American Mirror: The Life and Art of Norman Rockwell

“When I started reading this beautifully crafted study of L.A. art from 1950 to 1975, I worried that this would be yet another celebratory account. William Hackman’s book surprised and delighted me as the story grew darker and explored the many tragic turns that sapped the creative explosion of the postwar years. Seldom has a history of art in California captured so well the conflict of egos that grand ambitions quickened. Rooted in the particulars of Los Angeles, the story is relevant for understanding cultural movements in communities across the country, and perhaps in other countries as well. Hackman shows how much what was genuinely new in what artists, curators, and collectors did in Los Angeles expressed the uniqueness of place, but could what they discovered find acceptance on the international stage? Ultimately, this is a study of how, whatever one might want to believe in the universality of the creative process, the local and the global failed to synchronize. The book ends in the mid-1970s, but so much of what Hackman tells his readers points to later developments. It is a book that can be profitably read for what it tells us about culture today.” —Richard Cándida Smith, author of The Modern Moves West: California Artists and Democratic Culture in the Twentieth Century

“Los Angeles has always been the art world’s great white hope. William Hackman’s Out of Sight does a wonderful job of conveying the roots of that promise.” —Richard Polsky, author of I Sold Andy Warhol. (Too Soon)

Praise for Inside the Getty:

“Informative text graced by full-color photos takes you on an in-depth tour of the Getty Villa in Malibu and the Getty Center in Brentwood.” —Pasadena Star News